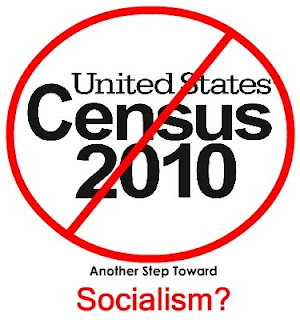 Census 2010 isn't amazingly unique or anything, it just seems that Obama has a special hard on this year encouraging us to fill it in. I'm all for keeping track of who is coming and going and living in our country, but the special attention that the 2010 Census is getting is a little disturbing.

I don't trust ANYTHING that is advertised too often. Even the 2010 Census Website is extra creepy this year - it shows a city street with mostly minorities walking around saying VERY STRANGE things. There is a black woman who says "If I'm something here, then maybe my whole family back home in Africa, everyone in the village and in the city will be proud of you". What the hell does that even MEAN? Weird stuff man. There is another guy who says "I'm not just a cab driver, I'm also a good looking man driving a nice car." I'm sorry, but that one is just plain psycho babble. Obama is going towards the weird in a big way on this 2010 Census thing. Oh, and be careful when you go to that website, they try to get you to fill out a little survey that pops up magically while you're looking at the site.

There has to be a reason that the Obama admin is so set on the Census this year. You've seen or heard the add "We can't move forward until you mail it back" on television, radio, and they even have a tour bus that is traveling across America visiting lower income college campuses and underprivileged high schools mostly in the ghetto.

Why does the Census 2010 tour bus only stop in poor communities? The same reason Obama won in the first place, poor people are less educated and frustrated with their lack of social status and general income. Therefore, they are easily motivated to bring about some sort of "change" - Obama's campaign staple. They don't care about what kind of change, as long as it breaks up the monotony of their everyday lives in poor-ville. The poor tend to overlook one major point: They are poor for a reason! Read a book, do some research, go to school, work TOWARDS something instead of just becoming a "cog in the sprog" employee of a large company. Build something for yourself, show some initiative - ah, never mind - that will NEVER happen - the poor just want to sit around and vote for a government that promises to make them more wealthy by MAGIC.

The poor are easy to provoke and easy to brainwash. Obama's agenda involves a strong element of brainwashing the poor into acting and thinking like a socialist regime. That, my friends is why the 2010 Census bus stops in the ghetto. The second reason that the 2010 Census campaign is focusing on the poor and the youth (who are innately poor) is that they tend to be afraid of the government. They typically DO NOT mail in their census forms. Just like comedian George Lopez says, "how do they know how many Mexicans are in the US, they never answer their door!". That is actually very true. That is why one of the questions on this year's Census directly asks whether you and your family are Latino in ANY way. That is too weird. Anyway, here are the questions on the 2010 Census:


How many people were living or staying in this house, apartment, or mobile home on April 1, 2010?

We ask this question to help get an accurate count of the number of people in the household on Census Day, April 1, 2010. The answer should be based on the guidelines in the 'Start here' section. We use the information to ensure response accuracy and completeness and to contact respondents whose forms have incomplete or missing information.

Were there any additional people staying here April 1, 2010 that you did not include in Question 1?

Asked since 1880. We ask this question to help identify people who may have been excluded in the count provided in Question 1. We use the information to ensure response accuracy and completeness and to contact respondents whose forms have incomplete or missing information.

Asked since 1890. Homeownership rates serve as an indicator of the nation's economy. The data are also used to administer housing programs and to inform planning decisions.

What is your telephone number?

We ask for a phone number in case we need to contact a respondent when a form is returned with incomplete or missing information.
Please provide information for each person living here. Start with a person here who owns or rents this house, apartment, or mobile home. If the owner or renter lives somewhere else, start with any adult living here. This will be Person 1.

What is Person 1's name?

Listing the name of each person in the household helps the respondent to include all members, particularly in large households where a respondent may forget who was counted and who was not. Also, names are needed if additional information about an individual must be obtained to complete the census form. Federal law protects the confidentiality of personal information, including names.

Asked since 1790. Census data about sex are important because many federal programs must differentiate between males and females for funding, implementing and evaluating their programs. For instance, laws promoting equal employment opportunity for women require census data on sex. Also, sociologists, economists, and other researchers who analyze social and economic trends use the data.

What is Person 1's age and Date of Birth?

Asked since 1800. Federal, state, and local governments need data about age to interpret most social and economic characteristics, such as forecasting the number of people eligible for Social Security or Medicare benefits. The data are widely used in planning and evaluating government programs and policies that provide funds or services for children, working-age adults, women of childbearing age, or the older population.

Is Person 1 of Hispanic, Latino or Spanish origin?

Asked since 1970. The data collected in this question are needed by federal agencies to monitor compliance with anti-discrimination provisions, such as under the Voting Rights Act and the Civil Rights Act. State and local governments may use the data to help plan and administer bilingual programs for people of Hispanic origin.

What is Person 1's race?

Asked since 1790. Race is key to implementing many federal laws and is needed to monitor compliance with the Voting Rights Act and the Civil Rights Act. State governments use the data to determine congressional, state and local voting districts. Race data are also used to assess fairness of employment practices, to monitor racial disparities in characteristics such as health and education and to plan and obtain funds for public services.

Does Person 1 sometimes live or stay somewhere else?

This is another question we ask in order to ensure response accuracy and completeness and to contact respondents whose forms have incomplete or missing information.

I can't help but think that the importance Obama is placing on the 2010 Census is yet another step towards a Socialist Nation, and I wouldn't be surprised if the government will someday make it mandatory for citizens to fill out the Census, with penalty for noncompliance, like the tax system. Just watch.
at 3:26 PM