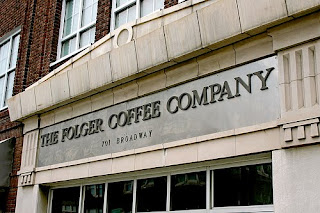 On the downside, 179 people will have to look for a new job. Some will probably retire as I'm sure that there has to be a substantial amount of senior citizens working there since Folgers has been in Kansas City for over a century and they have a great reputation for keeping their employees for the long term. I think that it was great of Folgers to at least give 2 years notice before pulling the plug on what was probably the only job that some of Folgers employees have ever had. I once thought that the days of the companies that held on to their employees for the long term were over, but with Obama's socialist influence, the big brother companies might become more solidified and actually bring back the days where you started working for a company when you were 22 and retired from the same company when you were 65. That's one advantage of a Socialist nation; long term job security.

In the case of Folgers in Kansas City I'm guessing that they had a lot of employees who had worked there for the better part of their lives. They will move their plant production to New Orleans in mid 2012, according to new corporate owners The J.M. Smucker Company. I don't know if the new owners had anything to do with the closing of the Folgers plant in Kansas City but I'm sure it had something to do with it - Part of a grand plan, no doubt.

Coffee itself is a strange phenom - basically a legal version of SPEED that the working class consume in mass quantities in order to be able to function in a spastic, condescending, pointless, wasteful corporate world. So basically, millions of Americans get all hopped up on SPEED (and yes, it is a version of speed), drive like spazzes to work, drink MORE coffee (speed) when they get to work, and then babble and spaz around the office. Just in case you didn't understand that last rant - the point is COFFEE IS A DRUG. If you think that you're living a healthy lifestyle, setting a good example for your children, an upstanding member of community and all that crap, you're not - you're just a speed junky in training. Don't take yourself so seriously - you're a slave to the man, and your job is most likely a meaningless shuffling of papers, faxes, numbers, sales figures and lies that only fuel a large entity that will certainly not share it's success with you, but will eventually let you go without a moment's thought of regret. Soak that one up.

So, with that said, selling an addictive product like coffee makes Folgers seem a little less sanctimonious and a little more evil. I know that the smell in downtown Kansas City is DEFINITELY evil and we will not miss that.
at 12:00 PM