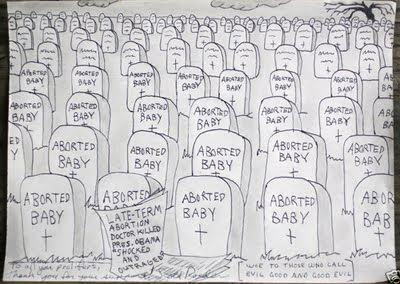 Dr. George Tiller of Wichita, Kansas was one of the only abortion doctors left in the country who would perform late term abortions from his abortion clinic in Wichita. Wichita, Kansas was known as the abortion capital of the United States. This practice of performing late term abortions in the state of Kansas attracted the attention (and frustration) of an anti-abortion group lead by Scott Roeder from Merriam, Kansas near Kansas City, Missouri.

On May 31st, 2009 Scott Roeder killed Dr. George Tiller in his church by putting a gun to his head and killing him execution style. Scott Roeder had actually visited the church for several Sundays in a row, waiting for his chance to kill Dr. Tiller. He always parked his car facing out for an easy escape and sat in the back of the church. Scott Roeder is being sentenced today in the Sedgwick County Kansas District Court for the murder of Dr. George Tiller. He faces either a mandatory life sentence with possibility of parole after 25 years, OR he faces what is known as a "hard 50" - or 50 years without possibility of parole.

Scott Roeder was known among friends as a religious fanatic - and most of the friends who spoke on Scott's behalf in court were obviously religious fanatics as well, quoting Psalms 139 - "For thou hast possessed my reins: thou hast covered me in my mother's womb" to attempt to defend Scott Roeder's actions. This is yet another example of someone who took the stories and quotes in the Bible too seriously. The Bible was written thousands of years ago and it is a nice little story book, or mythology if you will, but the Bible is by no means to be taken literally in this modern day and age. Unfortunately for Dr. George Tiller, Scott Roeder and his group were brainwashed Bible freaks who took the ancient story book a little too seriously.

Dr. Warren Hern who was a close personal friend of Dr. George Tiller continues to perform late term abortions at his abortion clinic in Boulder, Colorado. He was interviewed and he stated that it was not enough for the law to find and punish criminals such as Scott Roeder AFTER they have committed a crime. Dr. Hern stressed the importance of enforcing the FACE ACT - Freedom of Access to Clinic Entrances - that was passed in 1993 providing for the safe passage of women seeking abortions in abortion clinics.

Scott Roeder was known among friends as a religious fanatic - and most of the friends who spoke on Scott's behalf in court were obviously religious fanatics as well, quoting Psalms 139 - For thou hast possessed my reins: thou hast covered me in my mother's womb. It's strange that in this modern day and age people still actually believe that the bible is anything but a nice little story and mythological at best. But Scott Roeder and his group were brainwashed bible freaks who took the ancient story book a little too seriously.

Well, I guess I meant that it makes people feel better when they read it and make believe that it really happened.

"...the Bible is filled with hate, killing and violence..." reveals the fallen human nature after Original Sin. People who don't have knowledge of the sacred scriptures shouldn't be making comments about things that they don't understand.
Because anyone could just easily comment that "random mutation" is nonsense.