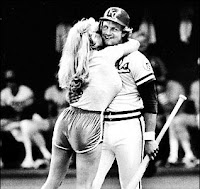 Hitting Tips for MLB The Show 10

Some blogs tell you to swing for the sweet spot using your left joystick to aim your bat.  This is really a more advanced feature for players who have already learned how to hit well.  The best way to start hitting is to take your hand off of every button / joystick except for the X button.  Be sure and use the "guess pitch" function before each pitch.  I usually guess 4 Finger Fast Ball as this is 90% of pitchers "go to" pitch and is usually the X button.  I also like to know when the heat is coming.  So, to guess the pitch before the pitch, hold down R2 and hit X - some pitchers have the 4 Finger Fast Ball on another symbol - you have to look at the pitch guide on the side of the screen to see which symbol is the 4 Finger Fast Ball.  Ok, so now you're going to be alerted (the strike zone flashes red) when the heater is coming at you.  This definitely helps.  Also, just because you are guessing fast ball doesn't mean that you shouldn't swing at other types of pitches, this is just to alert you when the heat is coming - if you see that the heat isn't coming then you know that you might have a slow juicy sinker coming that you can swat out into the parking lot.

It is not recommended that you swing at the first pitch, but sometimes if you guess fastball and you're right (you get the little red flash in the strike zone) then the pitcher might be trying to sneak in an early strike to start the at bat by throwing the heater by you.  If you guess heater and you are right, it occasionally pays off to go ahead and jack that first fast ball pitch.  Don't swing too early - even the fast balls give you a second to read them, sit back and rock that thing.  When batting always remember that just because you get an out (ground out to the second basemen, etc.) does not mean that you did anything wrong.  A great batting average is still only .300 which means you get an out 2 out of every 3 times you go to bat.  Outs are just part of the game.

Most of the time I will not swing at the first pitch.  I play on Veteran mode and this seems to be the pattern of pitches that the computer likes to throw:


1st pitch - could be a nice fastball down the middle, but most of the time even if you hit the first pitch it will be an out - especially if it is early in the game and the starter is fresh.

4th pitch - If the count is 1-2 then LET IT GO - the computer LOVES the count of 2-2 and will almost always throw a ball when the count is 1-2.  If the count is 2-1 go cautiously, the next pitch could be anything and usually the computer tries to get a sneaky strike - usually somewhere just inside the strike zone - not a good ball to hit even if you make contact - this is the classic pitch that most batters foul off and even the count 2-2.  I'm not saying to just let the strike go by, but usually a 2-1 pitch is not a "meatball".

6th pitch - the full count.  Obviously you want to swing at this pitch 90% of the time.  Be careful if there are several men on base as this makes the pitcher nervous and he may pitch a ball and walk you.  The pitcher may also panic and walk you if your batter has higher than average batting skills.  For example, Alex Rodriguez may very well get a ball pitched to him on a 3-2 count.

Here's a little trick - try pressing the left joystick directly 90 degrees (straight) to the right or left depending on what handed your batter is.  Example, a right handed batter - before the pitch push and hold the left joystick directly straight to the right.  Hold it there completely through your swing.  I've gotten some really good results off of this technique.  The only catch is, the pitch needs to be in the strike zone in order to make contact.  I tried this last night for every at bat for an entire game and I hit 5 home runs and several doubles and a triple.  I don't know if this is a game glitch or maybe it's because it forces the batter to stretch his arms out and get a nice full swing.

Remember, if you're having a bad day at bat, forget all of the fancy crap and just use the X button alone.  Pay more attention to the pitches you're getting.  Look up at the scoreboard and see how many pitches the pitcher has thrown that day already.  If he's thrown under 30 pitches and he's a good pitcher, you may have to wait an inning or so until he starts to tire before you start smacking the ball.  Also be very aware when the pitcher has a high pitch count.  If a pitcher has 40+ pitches in the game, it's time to start taking advantage of him - you can start swinging at some first pitches, etc.  If you're winning the game and they are sending in a lot of relief pitchers, I just ignore those guys and swing for the fences every pitch - you will strike out a few times but you should get a lot of hits as well - hitting against relief pitchers is the best time to hit home runs.

Hope this helps - feel free to post any questions that you have right here and I will try to answer them.