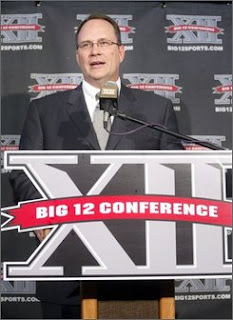 The possible conference lineup scenarios were shaken up yet again Sunday evening, with new developments that may signal an end to the controversy that has surrounded the Big 12 and Pac 10 schools for weeks. Big 12 Commissioner Dan Beebe is considering implementing a Big 12 television network for the remaining ten schools in the conference.
The new network, which would be modeled after the Big 10’s successful network, could produce anywhere between $17 to $20 million dollars for the remaining schools. The Big 12 would also split the penalties Colorado and Nebraska would be forced to pay for leaving the conference, adding further financial incentive for the remaining schools to possibly stay and salvage the conference.
The move may be too little too late from Beebe, who has been criticized for his lack of a proactive approach throughout the various progressions of conference realignment news. The Pac 10 has reportedly already offered Texas, Texas A&M, Texas Tech, Oklahoma and Oklahoma State spots in the conference, in addition to Colorado who has already committed.
Texas A&M is reportedly interested in the SEC and has turned down the Pac 10, which may now be targeting Kansas. Pac 10 Commissioner Larry Scott has reportedly flown to Kansas City to talk to KU officials as early as Monday morning.
Beebe’s actions and many of the Big 12’s schools desire to stay put may save the conference. However it appears everything hinges on the decision of Texas. The schools must decide what is best for their future first and what is best for the rest of the Big 12 schools second. No matter what happens, it appears that an outcome should be coming soon that will significantly or insignificantly shake up college sports.
at 12:24 PM

Where does Mizzou stand on all of this?