New Big 12 Will Be More Competitive 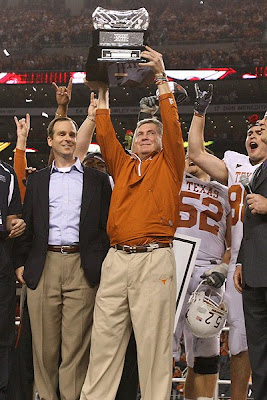 The Big 12 has officially been saved as a conference, and the new make-up of the league should make for increased competition and a tougher road to a conference championship. Should the league continue as a ten team league, which seems to be the most likely outcome after the upcoming departures of Nebraska and Colorado, the new ten team league will be more difficult for both football and basketball, and could make a stronger conference overall.

The New Big 12’s football scheduling will likely be similar to the Pac 10’s conference scheduling: each team will play three non-conference games and then nine conference games. With the elimination of a north and south division, this will assure a much harder schedule, especially for the north teams. Kansas State coach Bill Snyder, well-known for his preference for scheduling cup-cakes before getting into the tough conference games, warns that while the conference will be stronger overall, the schedule may be too much for some teams to overcome (see all of Snyder’s comments here: http://www.kansascity.com/2010/06/17/2026094/k-states-snyder-likes-the-new.html) North teams like Kansas State, Kansas and Iowa State will now face Texas, OU and Texas Tech every season, which makes the odds for a BCS game run (like Kansas achieved in the 2007 season) difficult.

Big 12 basketball will also be much tougher in conference play, as the schedule will likely now feature an 18 game schedule in which every team plays every other team once at home and once on the road. Increased road games could provide problems for perennial favorite Kansas, who despite winning the league six strait years, has struggled mightily in Austin and Stillwater since the league’s inception. The increased road games and revenge opportunities teams will face should help the league’s schools once the NCAA tournament starts.

The new Big 12 schedules will increase the difficulty to win the league in both football and basketball. While ten teams should make for a more competitive conference, the lack of parity could be problematic, especially for the former north schools.