World Cup Crowds in Kansas City Shows Soccer has Grown - But How Much? 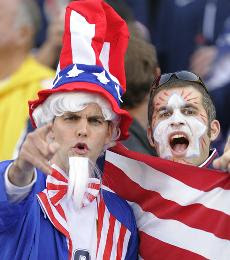 Since the United State’s run to the Quarterfinals in 2002 to the arrival of David Beckham to the LA Galaxy, soccer pundits have waited for the sport to take off in America. Saturday’s game-watching crowds in downtown Kansas City showed an increased interest in the sport, however only time will tell if that support for soccer is here to stay.

After the United States hosted the World Cup in 1994, FIFA mandated the creation of an American soccer league. The MLS, now over a decade old, has been one example of the sport slowly growing in America. With many teams moving from NFL stadiums to their own complexes (such as the Wizards), progress is being made to establish the sport on a national level.

Despite the growth in the MLS league and the international star power of players such as Landon Donovan and Tim Howard, there are many hurdles the sport must overcome to enjoy the following the NFL or MLB has. Unlike European, South American and African nations, the US already has established leagues in several other sports that are extremely popular. The MLS is also a clear step below European leagues such as the English Premiership, which could turn off some casual fans with the stigma of a second-rate league.

The massive crowds in Kansas City’s Power and Light District and other venues show that Americans are willing to take a national interest in their teams, from the world cup to the Olympics. While soccer has and continues to grow, there are many limitations and hurdles the sport must face to escalate to the level of an NFL or MLB.