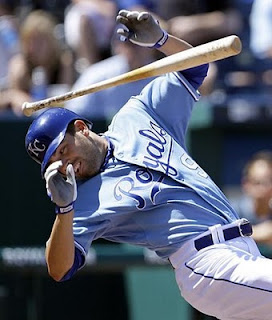 David DeJesus will undergo surgery on his thumb that will likely put him out for the season.  DeJesus was put on the disabled list on Thursday night after chasing down a line drive by Yankee's shortstop and captain Derek Jeter which ultimately ended up as an inside the park home run despite David DeJesus' efforts.  Royals manager Ned Yost told reporters this evening that they expected DeJesus to be out for at least 10 weeks which would put him out until late September, virtually the end of the season.

This comes as an awful blow to Royals fans as the team was just starting to see some success on the diamond.  Alex Gordon was called up from Omaha to take his place, and Mitch Maier will also fill in to fill the void left by DeJesus for the next few games against the rival Yankees.  This stunning injury came on the tail of a large trade made by the Royals this week with The Los Angeles Angels of Aneheim.

David DeJesus learned after examination that he had completely torn a ligament in his thumb.  The surgery needed to repair the damage to his thumb will require that he sit out for the rest of the Royals regular season.

DeJesus was suspect for a trade from the Royals after the 2010 season, so this could present an opportunity for the club to test it's abilities without DeJesus.  The Royals have several young players who are looking for playing time, and it looks at least for now that they are going to get it.