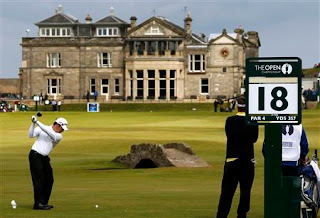 By now, a few more people can likely pronounce Louis Oosthuizen's name. Oosthuizen, a native of South Africa and the 54th ranked golfer in the world, ran away with the British Open held at golf's birthplace, Saint Andrews. While Oosthuizen's upset victory makes for a great story, the lack of golf's superstars performing well at golf's biggest events could be damaging the sport in the long run.
After a successful world cup, the South African Oosthuizen won golf's most recognizable event on the birthday of Nelson Mandela. Oosthuizen's victory lacked the drama other golf majors have had in the past due to his dominant performance and wide margin of victory. It will be interesting to see what the ratings for the final day of the tournament show.
With Tiger Woods caught in a funk after his marriage scandel and Phil Mickelson remaining predictably unpredictable, upstarts such as Oosthuizen have as good a chance as ever to steal a major. However, individual sports such as golf and tennis rely heavily on star power to generate interest from both diehard and casual fans. If more golfers such as Oosthuizen and Y.E. Yang continue to win their first major, interest in the sport could be damaged in the long run.
at 7:54 PM