Most Controversial Call From World Cup Stems From Correct Ruling 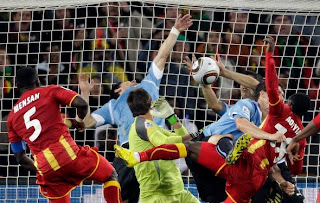 In a world cup filled with missed calls that have decided the outcome of games, a correct call may generate the most controversy and attention from fans and FIFA. Uruguay forward Luis Suarez’s blatant handball to stop a late ball was correctly seen and called by the officials, yet it helped Uruguay advance to the semifinals over Africa’s last hope, Ghana.

Late in the second half with the game tied at one, Ghana mounted one last strike to take the lead. After the ball bounced around deep in the box, a Ghana player finally got a shot towards goal – which was batted out of the air by Suarez. The striker was correctly given a red card and Ghana was awarded a penalty kick, and the game should have been over. Only Ghana missed the penalty kick, and Uruguay went on to win the game in the shootout, 4-2.

After the game, talking heads and fans alike have debated the final sequence of the game. If a ball is going into the goal and a player illegally touches it, should the goal be awarded anyways? Many analysts feel that forcing the team to take a nerve-wrenching penalty shot is too tough a situation for what should have been a goal. Defenders of the rule argue that being handed a red card for the foul – and missing the next game – is severe enough a penalty and part of the risk involved for batting the ball out illegally.

While there are legitimate arguments from both sides in regards to the rule, the likelihood of FIFA changing the rule is slim. This is the same organization that refuses to implement video replays into its games despite obvious blown calls from the referees throughout the tournament. Interestingly, the controversy this time isn’t from a missed call but from a correct decision from the referee. For once, FIFA and the rest of the world need to examine not the man making the ruling but the rule itsef.