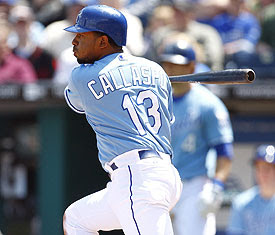 Royals’ third baseman Alberto Callaspo has been traded to the Los Angeles Angels for two pitchers. Callaspo was dealt just before Thursday’s loss to the New York Yankees. In the deal, the Royals acquired right hander Sean O’Sullivan and minor-league left hander Will Smith. The deal was made to clear a starting spot for prospect Mike Moustakas. Moustakas is believed to be one of the organization’s top minor league players.

On paper, the move makes a lot of sense for the Royals. They made room for a top prospect and signed two good young pitchers in the process. However, the Royals have been down this road with often disastrous results. The Royals have traded the likes of Carlos Beltran, Jermaine Dye and Johnny Damon in the past for a series of prospects, and never got back the value of the players they dealt. While Callaspo isn’t an All-Star player as Beltran, Dye and Damon were, he has been a very steady and productive hitter and infielder. The Royals need Moustakas and O’Sullivan to produce, or Kansas City fans will have to watch another former player tear up for a contender with little to show for it.

Speaking of prospects who haven’t lived up to their potential, Alex Gordon has been called up to replace David Dejesus, who was lost for the season due to injury. Gordon has been a disappointment so far, and Dejesus has been one of the Royals’ most productive hitters for the past season. Losing Callaspo and Dejesus deals a big blow to the team’s offense, but will give younger players an opportunity to contribute. Hopefully these turn-of-events will make the team better for the future, but I’m not holding my breath.