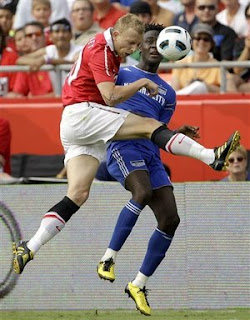 The Kansas City Wizards as well as its fans sent a strong message to the world about American soccer yesterday. The Wizards took down the Red Devils 2-1 in regulation in front of a record crowd at Arrowhead stadium.
The game had an announced attendance of 52,424, beating the old record for a soccer crowd in Kansas City set in 2001 for a national game against Costa Rica. Davy Arnaud scored for the Wizards in the 11th minute off an assist from Kei Kamara. United tied the game just before halftime on a penalty kick, however Kamara was able to convert off a corner kick in the second half to give the Wizards the lead for good.
After Kansas City set record crowds for watching televised soccer during the world cup, the Wizards vs. Manchester United game was able to successfully build on that momentum for a memorable experience on Sunday. The popularity of the world cup and the arrival of Manchester United, one of the most recognizable teams in the world, certainly helped the record setting crowd. It will be interesting to see if soccer continues to gain momentum in both Kansas City and the United States as a whole, or if Sunday's game was merely a diamond in the rough.
at 6:20 PM