Charles Should Start at Running Back 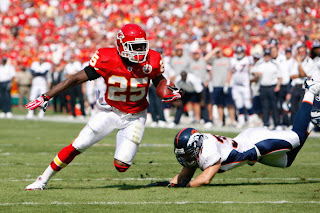 Chiefs head coach Todd Haley continues to insist that Thomas Jones is the team’s starting running back as the start of the NFL regular season approaches. While Jones has had a steady and productive career, the Chiefs must make Charles its feature back for the offense to be successful this season.

If the Chiefs need convincing, all they need to do is take a look at the Tennessee Titans. After initially splitting carries between Chris Johnson and LenDale White, the Titans gave Johnson the feature back title and he responded by rushing for over 200 yards. The Chiefs are in a familiar situation now, with a steady back in Jones and a home-run hitter in Charles. Last season, Charles rushed for 953 yards over the Chiefs final eight games, and provided an offensive spark the team badly needed.

I was excited that the team signed Jones in the offseason, and am in no way advocating the Chiefs render him meaningless. However, Jones has proven he can produce, and will provide a steady rushing attack should Charles struggle. Let Charles have his chance at feature back, and the Chiefs may find their own Chris Johnson.