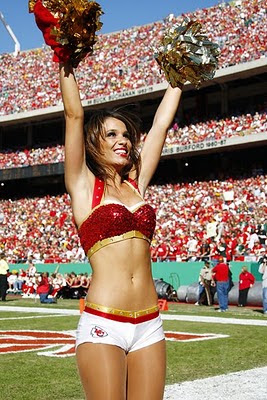 Today NFL expert Pat Kirwan predicted that the Kansas City Chiefs would likely finish with a record of 6 and 10.  He explained that the Chiefs were definitely moving in the right direction but the changes that they have made would not affect the scoreboard that much in the 2010 season.  The Chiefs were 4 and 12 in 2009 and they have made enough improvement to possibly move up to 6 and 10 in 2010.  Many Chiefs fans are hopeful that the team can at least muster up a .500 season at 8 and 8 this year.

What improvements have the Chiefs made this year?

The Chiefs added star running back Thomas Jones, who many feel was a huge mistake on the Jets part for letting him go.  Jones adds a tremendous threat in the backfield and is a perfect compliment to Jamaal Charles as Jamaal is smaller and faster and Thomas Jones is stronger and can be used to punish defenses up the middle.  The Chiefs are looking to try their wings at the Wildcat offense this year involving speedy rookie WR Dexter McCluster, Thomas Jones and Jamaal Charles as the cast.

The Chiefs also added a talented safety in Eric Berry, currently wearing number 29.  Whether or not Berry will make the starting line up is yet to be determined, but you can bet that he will see a lot of playing time when the Chiefs go to the Zone Nickle and the Dime defense strategies.

NFL analysts feel that the Chiefs do not have a legitimate threat at the wide receiver position.  Wide receiver Dwayne Bowe has already been in the media this year for a few off color remarks that he made and is not really considered much of a threat to opposing defenses.  Aging Chris Chambers is not considered much of a threat either.  Young rookie Dexter McCluster could provide a spark downfield with his speed but at 5'8" 170lbs you probably won't see him going across the middle.  If the Chiefs receivers are not going to force opposing defenses to take their gameplan focus off the run, then obviously the Chiefs running attack will suffer.

Top NFL analysts are also commenting that the Chiefs are seriously lacking talent on the defensive line and linebacker positions.  The Chiefs were 31st overall against the rush in 2009 allowing 156 rushing yards PER GAME.  That stat has to change or they cannot win.

Even though the Chiefs will do well to end up 8 and 8 at season's end, the Chiefs fans are still very excited and optimistic to see their new team in action.  The Chiefs open their season with an unusual Monday Night Football appearance vs. the San Diego Chargers on September 13th.

All I can say is - nice picture!

Was this about the Chief's or the cheerleaders? That photo is what Eddie Murphy describes as an "eye catcher". :)

Shanna is definitely a hottie - she's a good friend of ours :)

she is really hot