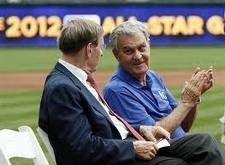 David Glass Selling the Royals?
Rumors that Royals' owner David Glass is considering selling the team have surfaced lately around Kansas City. These rumors have been swirling around the internet and talk radio for weeks, however Glass insists he has not heard about them until recently. Glass denied that he has any interest in selling the team.
While Glass may be telling the truth, as the old saying goes where there is smoke there is usually fire. It would not be surprising if Glass had at least somewhat considered the move, given the team's struggles both on the field and financially since he has taken over.
It is no surprise Glass has denied these initial allegations, but it will be interesting to see if anything close to the issue develops into the future. Perhaps it is all pure speculation, but the poor fortunes of the Royals may be prompting Glass to make a move. A change could be beneficial for both sides.
Comments?
at 10:16 PM

If David Glass is actually selling The Royals in Kansas City then he is probably not going to publicize or admit it at this time. Selling the Royals would be a major deal to Kansas City even though the team has struggled for many years, they still love their Royals!