Does Anyone Care About Alex Rodriguez's 600th HR? 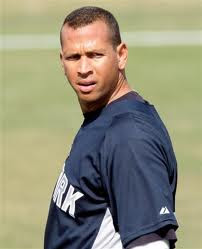 Most people will tell you that baseball is a numbers game. More so than any other sport, baseball relies heavily on its statistics to judge players and teams from different eras across its long history. However, Alex Rodriguez's 600th home run milestone lacks the significance that many other records in the sport carry, watered down by his own performance-enhancing drug usage admission and the steroid era in general.
Rodriguez belted a two-run shot in the first inning of the Yankees 5-1 victory over Toronto, ending a terrible streak for the slugger in which he struggled mightily to get on base, much less go yard. With all the buildup ESPN and other networks gave reaching 600, you think that this milestone would mean something special to both the fans and the media.
Rodriguez's admission of using steroids has cast a dark shadow over a fantastic career. He is the youngest to reach 600 home runs, finally had a huge october while leading a team to a championship and is one of the game's most recognizable players. However, after witnessing Barry Bonds, Mark McGuire and Sammy Sosa get thrown into baseball hell under suspicion of PED use, it appears A-Rod will be joining the club of record-holding MLB stars who disgraced the game.
Rodriguez's milestone and controversy is really just a small example of a bigger black cloud hanging over baseball: PEDs have made many records meaningless to the fans. The sports' greatest players, teams and records from the past 20 years, fairly or unfairly, mean less to the fans than before. Rodriguez may end up with the most home runs in history, but PEDs have tainted his career and his accomplishments in the eyes of the fans.
Comments?
at 8:37 PM

It definitely puts an asterisk next to his name as well as the others that used PHDs during their careers.

However, it still takes a lot of good old fashioned skill to hit the ball out of the yard that many times.