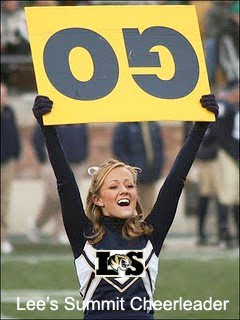 The breakdown continues.  We started off by breaking down the neighborhoods in the heart of Kansas City, on the Missouri side.  Today we will break down a small neighborhood just to the Southeast of greater Kansas City known as Lee's Summit.  If you are moving to the Kansas City area from out of town then you need to know some real facts about the neighborhoods in this area, not just the crap that your real estate agent is feeding you to get you to buy that stubborn house that has been on the market for 3 years that his boss is offering a bonus to the real estate agent who finally sells the thing.  In this blog we're going to focus on the following Kansas City neighborhood:

Lee's Summit is basically the working family's "escape" from the bad neighborhoods found in the heart of Kansas City.  Residents of Lee's Summit want to live amongst other people of their own race and financial make up.  They also want their children to go to schools that represent this as well.  If you note the racial makeup of the city (paragraph one above) then you will understand what I mean.

Upside - the upside of Lee's Summit is that is has a good school system, it is family oriented and it is away from the crime and questionable neighborhoods in the heart of Kansas City.  Lee's Summit also gives you more "bang for your buck" when it comes to houses.  Housing costs are low and the typical house in Lee's Summit is a 2 story 3 bedroom with deck and finished basement.

Downside - If you don't like children or dogs then this neighborhood isn't for you.  Not much to look at - Lee's Summit is devoid of any character as far as landscape and nature, it is basically a giant field out in the country with houses and porches.  Lee's Summit is a little bit on the redneck side of things - lots of pickup trucks, construction workers, owners of landscape businesses etc.  There is definitely an element of white trash going on out there, just visit the King's Buffet on 291 Highway to see what I mean.  It is not a very easy commute to other parts of the city.  Lee's Summit is kind of "out there" in the country which is good once you get home but it sucks to have to drive anywhere.

To sum it up, Lee's Summit is kind of a more country-ish pickup driving downgraded copy of the more wealthy and sophisticated Overland Park.  They tried to imitate the lavish strip malls and restaurants of Overland Park, they even tried to copy Overland Park's idiodic street design that makes it impossible to turn into those strip malls - or make a left - anywhere.  But all and all Lee's Summit is a nice safe place to live with low housing costs and great schools.