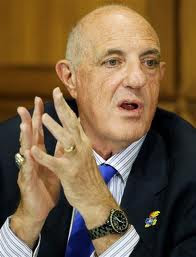 Lew Perkins Resigns
While travel is a necessity for any high-ranking official, University of Kansas athletic director Lew Perkins has done a lot of it. In high style. Reports have been released showing Perkins' travel expenses compared to other athletic officials, showing that Perkins' preference for private planes and expensive travel far exceed the norm for his position.
One glaring example is Perkins' trip to the funeral of deceased former Kansas State quarterback Dylan Meier, older brother of former KU star Kerry Meier. After flying to the funeral, Perkins used a $425 car service while K-State coach Bill Snyder rented a car for $45. Perkins has also taken advantage of KU's private jet and planes belonging to KU boosters.
Perkins has defended his position by citing that time is extremely important to him, and quick travel is a must. While this is certainly the case, his travel expenses compared to other athletic directors is shocking. While KU has one of the most profitable athletic departments in the country, and Perkins has had a lot to do with that, it doesn't mean the extra funds need be spent on luxurious travel. Perkins did some great things for Kansas, unfortunately these new reports may diminish his legacy.
Comments?