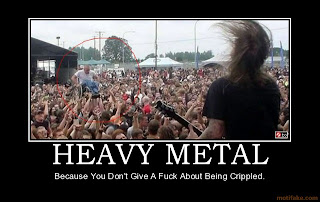 Megadeth and Slayer invade Kansas City Monday Night
Lock up your daughters, Kansas Citians - Megadeth, Slayer, and Testament will destroy Kansas City metalheads tonight at Sandstone Amphitheatre. The carnage begins at 7PM, Monday August 23rd, but for those of you who simply cannot wait to pay $8 for a beer, the doors open at 5:30. Both Megadeth and Slayer released new albums in 2009, so look for a pounding mix of new material and ear numbing classics.

Original Bassist Dave Ellefson rejoins Megadeth this year after an 8-year hiatus, rested and ready to deliver throbbing baselines and ominous backing vocals. Slayer's lineup has remained largely unchanged. These four guys have been Reigning Blood since 1981. After the annihilation on Monday night at Sandstone, fans who haven't had enough can follow the American Carnage Tour to Denver on Wednesday night.

Dave Mustaine, front man for Megadeth, will also be pimping his new book today at 12:30PM at Unity Temple on the Plaza. Times have sure changed, 20 years ago the only way Dave would have seen 12:30 is if he was still awake from a previous night's drinking binge!

Hell yeah! We'll see you there! Megadeath and Slayer in Kansas City at the same time? It's gonna be a crazy Monday.