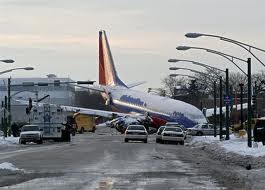 10.  San Diego Airport - Lindbergh Field
This airline claims the worst aviation accident in the history of California.  In 1978, Pacific Southwest Airlines flight 182 collided with a student driven Cessna 172 in mid air causing both plains to plummet to the ground and killing 144 people including some people that were on the ground.  The reason that San Diego's Lindbergh Field makes it in at our number 10 spot of most dangerous airports is because of the unusually high amount of air traffic that this airport gets each day.  Pilots also complain about the proximity of a large parking garage that sits just 200 yards from the entrance to the runway.
9.  Madeira Airport - Portugal, Spain
In at number nine most dangerous airports is Madeira Airport in Portugal.  In 1977 a 727 overshot the tiny 5000 foot runway at Madeira and fell 130 feet down onto a beach and burst into flames causing 131 fatalities.  Since 1977 Madeira has extended their runway to 9000 feet, however in order to do this they had to extend each end of the runway directly over the ocean.  Pilots know that if they don't hit their mark on the runway they will plunge into the ocean from either direction.
8.  Eagle County Airport in Vail, Colorado
Located in a valley to maximize wind challenges, Eagle County Airport is a danger due to surrounding mountains, snow, and most curiously the altitude.  Airplanes lose power in higher altitudes, which is fine when they have reached cruising speed at 30,000 feet but it's bad when they need sudden bursts of power to maneuver a safe landing.  Takeoff is the most challenging for pilots as there is an extremely precise takeoff pattern which navigates them precariously through the mountains.

7.  Courcheval Airport, France
This airport made our top 10 most dangerous airport list because it is basically a giant ski slope.  Only small planes land here so it doesn't make the news every time there's an accident, but there are plenty.  There are some incredible video captures of takeoffs and landings from Courcheval Airport. 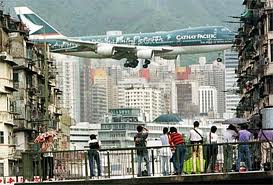 Prior to 1998 when Hong Kong opened their new airport, Kai Tak was a traditionally dangerous airport.  Famous for it's flybys of downtown Hong Kong at 100 feet or less, the buildings around the airport made it impossible for planes to level their wings to land until they got under 300 feet.  There are several incredible photos of giant planes weaving in and out of buildings in downtown Hong Kong while attempting to land at Kai Tak.  In 1993 a 747 skidded across the runway at Kai Tak and landed in a harbour.  While this was a very highly publicized event, there were fortunately no fatalities.


5.  Gibralter International Airport
Gibralter airport makes our top 10 most dangerous airports mainly because there is a four lane highway that passes right through the middle of the runway!  There is a stoplight, similar to one you would see at a railroad crossing that shuts down the highway whenever a plane takes off or lands.  This can stop traffic for up to 30 minutes.  The next challenge is the landing.  The rock of Gibralter creates an extremely complex wind circle that can throw the planes around quite a bit when they reach about 300 feet.  The swirling winds are very unpredictable and cause pilots to be on their "A" game every landing at Gibralter.

4.  Princess Julianna Airport at St. Maartin
The airport at St. Maartin is almost like a tourist attraction.  Planes coming in for a landing fly directly over the heads of beach-goers who frequent a local bar known for it's airplane flyovers.  The local beach bar actually puts up a chalkboard sign listing all of the landings so that the customers can get in good position for the planes to fly directly over their heads!  There is also a local custom called "riding the fence" where people grab onto a fence behind the area where the jets take off, wait for the jets to kick into high and then HOLD ON! as the jets propel winds of up to 70 miles per hour.  Pilots of jets have reported seeing people being thrown as far as fifty feet from the fence.  So far no one has been hurt, and it remains a great tourist attraction.

3. Gustaf III Airport - St. Barts
For starters, pilots have to have a special license to even land at this airport!  A short, 12 minute flight from St. Maartin, this 1200 foot runway only hosts planes holding 30 people or less.  There is a pretty cool video of a plane missing the runway and going into the ocean (no one was hurt) but it shows why this is one of the most dangerous airports in the world.


2.  Toncontín International Airport
Toncontin Airport near Honduras is one of the most dangerous airports in the world and was the host to the country's worst aviation disaster.  In 1989, Tan-Sahsa flight 414, a Boeing 727, failed to follow the regimented step-down proceedures while making their descent and smashed into a mountain killing 127 of the 146 passenger on board.  There are extremely precise step down manuevers that are to be followed when landing at Toncontin.  There are several landmarks including a highway, a house with a pool, and most importantly there are two large white arrows on the runway itself.  Pilots must land the plane between the two large arrows or they will go off the end of the runway.  Planes that miss the mark have to re-elevate and come around and try again until they hit the mark. 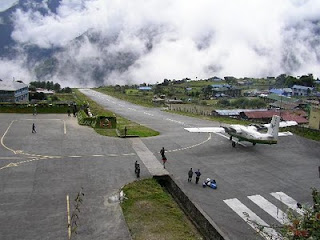 1.  Lukla Airport - Nepal
Topping our list of most dangerous airports is Lukla Airport in Nepal.  There have been too many crashes at this airport to list.  Lukla has all of the danger factors; mountains, fog, extreme weather conditions, low visability, and if that isn't enough - you only have one chance to land.  Due to the short runway and the mountains immediately at the end of the runway, pilots do not have the option of overshooting the runway and making a second attempt at landing.  Once the initial descent is made to land, you're landing whether you like it or not.  Takeoff is also a challenge due to the ominous mountains at the end of the runway.  Pilots must gain immediate altitude to shoot over the mountains before crashing into the side of them.  The airport is a source to a local village that is extremely primative and relys on the supplies delivered by plane.  When a plane is going to attempt a landing, a siren is sounded warning the locals to clear the runway.

Don't be afraid to fly. If you go down, big deal, there are lot worse (slower) ways to die like cancer. In a plane crash you are gone in about 2 minutes tops.

Also, plane crashes are EXTREMELY rare, and airplane travel continues to be safer than any other type of travel :)

Tips for those who are afraid to fly:

Take your Dramamine - be sure and take a Dramamine pill about 45 minutes before take off.

Bring some headphones. Listen to something soothing, music that you like, or a book on your iPod, laptop, etc. Not hearing the sounds that the plane makes helps a lot.

Sit as close to the front of the plane as possible. There is less engine noise in the front and it just feels safer up there for some reason.

Get a window seat. Don't think about plummeting to your death while looking out the window, think about how beautiful it looks up there :) What a view! Just think what people of ancient times would have thought of that view.

Use the bathroom a few times, even if you don't have to go. Sometimes it helps to break up the monotony of the flight if you get up out of your seat and walk around a little. In the old days, they used to let people stand around on planes and smoke and talk - isn't that crazy :)

Take a Benadryl - if you don't have any prescription anxiety medication (or know someone who does that you can borrow), then take a Benadryl, it relaxes the body and mind. Keep in mind that you may be drowsy upon arrival to your destination.

Talk to the people next to you. Just a little friendly conversation will help ease the tension and make you focus on something besides flying.

Hope these tips help, I hate to fly but have to all the time and I'm still alive :) So don't sweat it, just relax and you will be fine.

Most of these airports are profiled with video or at least photos in the linked article.