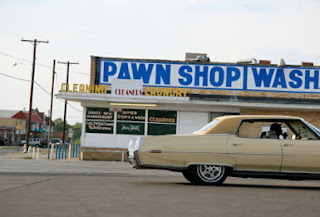 
Independence, Missouri, was the birthplace of former President Harry S. Truman and is an important hub for The Church of the Latter Day Saints, or the "Mormons" as they are more commonly referred to.  Independence was a common starting point for those who traveled along the Oregon Trail, California Trail, and The Santa Fe Trail and is therefore known as the "Queen City of the Trails".  The population of Independence is approximately 130,000 as of 2010, and it's racial makeup is 91.87% White, 2.59% African American, 0.70% Asian, 0.64%, and Hispanic or Latino of any race were 3.69% of the population.  The median household income is around $38,000 per year.

On a good note, Independence has areas where a few older "farm-type" folk reside and their respective neighborhoods are fairly docile - just don't go up the street to get gas at Quik Trip or you will immediately be immersed in the local criminal trash.  Basically, Independence is a place to be avoided at all costs - unless you need to break into a house, go next door to the pawn shop and get cash for the items you just burglarized, then go next door to the porn shop to meet a drug dealer who will sell you some shiny new Blue Meth.

Stay tuned for more Kansas City neighborhoods - broken down honestly by people who have lived here for over 35 years.  Don't listen to that real estate agent who is trying to unload a house on you that has been on the market for so long the real estate firm is offering a bonus to the first agent to move someone in.

Independence is not that bad when compared to some of the inner city Kansas City neighborhoods. Independence has a nice area that a lot of older people live and they have lived there all of their lives.

One of the problems with Independence as a neighborhood is that some of the worst parts of Independence are immediately noticed when you get off the highway. Directly off the first Independence exit from 435 is an Adult Video Store, I mean literally the first thing that you see. If you delve deeper into Independence you will find that there are a few nice neighborhoods there.