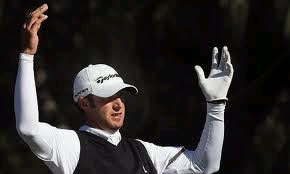 Dustin Johnson Sand Penalty
Sunday's thrilling end to the PGA championship featured a turn of events that some are calling the most controversial golf ruling in years. Dustin Johnson, who had rallied from behind to take a one-stroke lead, touched his club head down into a "bunker" on the last hole (a penalty) and thus missed out participating in a playoff.
Martin Kaymer ended up winning the event, defeating Bubba Watson in a three-hole playoff to earn his first major. However, the German's victory will forever he overshadowed by the ruling on Johnson. Most golf fans and analysts seem to be split on their opinion of the ruling. Many defend the golf officials for making the correct ruling and following the guidelines in the official rulebook, citing that Johnson was in a bunker.
The only problem with this logic, however, is the "bunker" Johnson was hitting out of didn't appear to be a bunker at all. It was more dirt than sand, and was out of bounds. Further, spectators had walked through it all day long which made it appear less of a sand trap. Johnson is a professional golfer who obviously plays the game constantly. If he doesn't think what he is hitting the ball out of is a bunker, isn't there a problem here? I'm not blaming golf officials for enforcing the rule, but the rule itself needs to be carefully examined.
Comments?

Dustin Johnson didn't think that the sand trap rules applied since he wasn't really in a sand bunker! Johnson's ball was 30 yards deep into the gallery. As Dustin commented "I've never seen a sand trap with members of the gallery standing in it".

I think that the PGA ruling of Dustin Johnson was ridiculous!