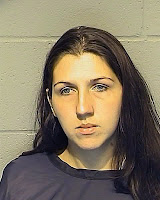 
Welfare workers were alerted to a home at the 8200 block of Center Drive in Desoto Kansas where resident Rachel Perez had abandoned her 6 year old boy in an unfinished attic.  The 6 year old boy has down syndrome and was discovered on Tuesday in the attic covered in his own feces and weighing at about 20 pounds (a healthy 6 year old boy should weigh about 45 pounds).

Rachel Perez had been keeping her son in the attic of the home that she was renting with her two daughters.  The attic where the boy was kept was unfinished, about 3 feet tall and often reached temperatures of over 100 degrees.  When Desoto police arrived at Perez' home she told them that her son was not there and she was taken away by police on previous warrants.  When Perez' family members urged police to return to search for the boy, they found him abandoned and malnourished in the attic on the brink of death.

Rachel Perez is now in police custody and was arraigned today before a judge for child abuse and for aggravated child endangerment.  Courtroom witnesses reported that Rachel Perez appeared "void of emotion".  Rachel is currently 5 months pregnant.  Medical experts say that malnourished children can develop medical problems later in life such as damage to the nervous system and brain damage.

Rachel Perez deserves to be punished severely for abandoning her son in that attic in Desoto. I don't know what the maximum penalty is in Desoto Kansas for child abuse or aggravated child endangerment but I hope she gets the full sentence at her court date.

This is the most horrific story ever! How could Rachel Perez do this in good conscience? She must just not have a conscience if it doesn't bother her to lock her 6 year old son with down syndrome in a 100+ degree attic, presumably left to die.

Perez either needs to get off of the drugs she is on, or get a prescription for some different ones. Or better yet, how about a full lobotomy?

Awful! She needs to be locked, neglected, with no food!