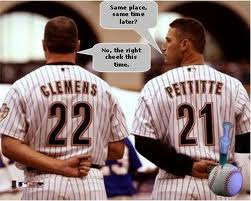 Roger Clemens' steroid saga is reaching its final chapter, and it looks like its going to be a dicey one for the seven-time Cy Young award winner. Clemens is being indited for lying for congress, proving that the truth is the best way to go in light of steroid accusations.
Clemens and Barry Bonds have repeatedly denied using performance enhancing drugs, and as a result their steroid sagas have dragged on for years. Even worse, both will likely serve time in jail for lying to congress about their PED use.
Compare these stories to those of Andy Petitte and Miguel Tejada, and its easy to see why admitting the use of PEDs is a must for the accused. Pettite came out and admitted he took steroids to recover from injury, and Tejada admitted to lying to congress and ended up with just a fine and probation. You rarely hear about these players' accusations now, and both have had productive years after the allegations.
I know legendary players such as Bonds or Clemens want to save face and preserve their legacy, however lying to congress and the public seems to be causing more trouble in the long run. Since I'm sure this isn't the last star who faces steroid charges, hopefully players in the future avoid a further tarnished legacy - and jail time - by telling the truth.
Comments
at 11:44 AM