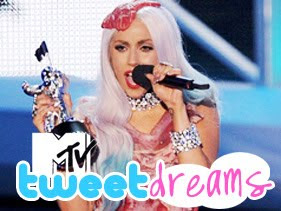 Pop culture junkies had their full fill of entertainment last night, as the 2010 VMAs provided more controversy, outrageous wardrobes and record breaking tweeting. Hosted by Chelsea Handler, the 2010 VMAs were able to earn the show its highest rating since 2002.
The writers for these shows always seem to find ways to cook up drama, and this year's version was no different. Only a year removed from the infamous moment when Kanye West interrupted Taylor Swift's acceptance speech, the show featured both artists performing tonight, with songs that addressed the controversy of course. Eminem, Drake and Tom Brady look-alike Justin Bieber also performed, and the show opened with a skit with Handler and Lindsey Lohan.
As usual, Lady Gaga was rewarded for her crappy pop music and outrageous outfits by getting the most attention at the show. Over 9,000 of the synced MTV tweets were about Gaga (substantially more than any other celebrity) and it seemed like half the show focused solely on her. I'm not wishing for a Brittany Spears quality fall from grace, but it would be nice for Gaga to not be on TV, in print, etc constantly.
at 7:05 PM