Browns Center Accuses Chief Defender of Hitting Below the Belt 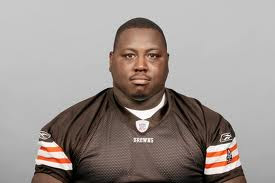 Football is a physical game, but according to Cleveland Brown Center Alex Mack, Chiefs Defensive Lineman Shaun Smith got a little too physical in the Chiefs 16-14 win over Cleveland on Sunday. According to Mack, Smith grabbed the Center's private parts during the game.

Smith has denied any wrong doing, however the play ended up having big consequences for the Browns. Mack claims he was so irrate after the play, he commited a personal foul on Chiefs Linebacker Derrick Johnson. The penalty led to a long field goal attempt for Browns kicker Phil Dawson, who missed what may have been a game-winning kick.

Smith played for the Browns the past two seasons before the team cut him in the offseason, so he may have had a little extra motivation to get back at his former team. The Browns may only have themselves to blame for his antics; this article mentions that NFL players accuse the Browns of the most crotch-grabbing and eye-poking in the NFL. Mack is simply getting the same treatment that Brown's opponents have been receiving for the past few seasons.

The bottom line is that the NFL is a dirty game, and things like this happen on the field all the time. Smith is not mentioned as one of the dirtiest players in the NFL, and did something that the Browns have become notorious for. Maybe in the future Mack should just wear a bigger cup.
at 9:58 AM