Decline of The Catholic Church - Catholicism On The Way Out 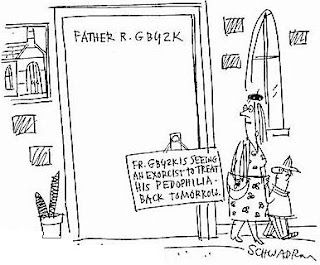 Decline of The Catholic Church - Catholicism on the Way Out

CNN announced today that they will be airing a new investigative news report on the Catholic Religion as a whole and the fact that it is rapidly declining in popularity.  Included in the show will be an investigation on "What The Pope Knew", an intense look into just how much the Pope and the Vatican actually knew about the priests that repeatedly raped young boys for over a century right under their noses.  CNN believes that the Pope and the Vatican knew about these heinous acts of rape and sodomy and ignored them.

This is old news and I'm sure that those who continue to practice Catholicism try to block that out - as they do many facts of truth that are right in front of them.  The Catholic Church is a vast land of wild imagination as they make up anything they want as they go along and pass it on as pure fact to their parishioners.  It's hard to picture a clear thinking business man or woman sitting in a Catholic Mass, listening to the fairy tails flowing from the priest and actually believing it as fact.  Perhaps it's like a watching a movie and you have to "suspend your disbelief" to get the benefit from it.  Try to picture the president of your company sitting in church, listening to stories about serpents, magical gardens and a woman giving birth without having sex and taking all of that seriously - seems pretty far fetched.  But the Catholic brain-washing techniques are very attractive to those who need answers to questions that no one technically has the answers to.  That is, as you know, how religion was invented in the first place; to explain the unexplainable.

The Catholic Church takes the whole story book a little too far, however, and many are starting to realize that most of what the religion is based on is a huge, yet entertaining, fantasy story.  This is the information age, and the common person is not simply going to take anything that is told to them as an absolute fact.  For example:

In the old days (before Google)Two or more people are in a disagreement about what year Mother Teresa founded the Missionaries of Charity in Calcutta.  If the disagreement wasn't taking place in a library, the true answer could not be verified.  What would usually happen back then was the person who could argue with the most conviction, almost selling the answer like a car salesman, could convince everyone present that he/she was correct and would, for the moment, win the argument.  Kind of like most political and religious leaders (starting to get the picture?)

Today (with Google)
Two or more people are in the same disagreement as above, one person gets online and performs a Google search and in seconds has the answer;  1950.  We are not easily fooled into believing anything that we hear anymore because the facts are within easy reach.

The point of that example is that the days of orators, political leaders and religious leaders just making up things as they go along are over.  We can all do a quick fact check on anything, any time, anywhere.  The reason that the Catholic Religion has survived verbatim for so many years is that no one ever challenged the story book or fact checked anything.  There was no technology to do any fact checking, and religious leaders just made things up as they went along to satisfy questions that the common people were asking about life after death, the source of their creation and other questions that really, no one knows the answer to, even to this day.  And furthermore, anyone who claims to know the answers to those questions is wrong, and if they try to push their unproven beliefs on others, they are also ignorantly arrogant.

Let's all come to one conclusion on religion, NO ONE REALLY KNOWS.  And that's ok!  It's ok to have a little mystery in life.

Email ThisBlogThis!Share to TwitterShare to FacebookShare to Pinterest
Labels: catholicism on the decline, decline of the catholic church, how much did the pope know

Seriously? The person who can't figure out, even in the glorious age of Google, that "you're time has come to and end" should read "YOUR time has come to an end" is going to tell us that before google there was no technology to help us fact-check? This has to be a comedy routine...because it's too funny to be anything else. Or wait...should I have written "ITS too funny.."

Wow, let's see how many flaws I can find...you don't even have the courage to sign your name to your article, you think that "Google" is the most reliable source of information for fact-checking, you fail to recognize that Catholics are not the only religious group that believe in "stories about serpents, magical gardens and a woman giving birth without having sex." But most importantly, you declare that no one can know how the world began, (this includes yourself), so this makes you as "ignorant" as the rest of the world, yet somehow you are "arrogant" enough to declare that what we believe is fantasy. Great job!