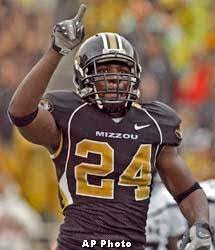 Derrick Washington Kicked Off Mizzou Football Team
On Wednesday, the Missouri Football Program announced the permanent suspension of Starting Tailback and team co-captain Derrick Washington. Washington was the leading rusher the last two seasons for the Tigers. This all stems from a Class C Felony Deviant Sexual Assault Charge. I don't want to get into details, but Washington is displaying the offending (allegedly) appendage in the picture to the right. The incident is alleged to have happened on the morning of this past June 19th. Though Washington will not touch the field again for Mizzou, he will be allowed to retain his scholarship if he remains enrolled in the University.
This is a somewhat surprising move for the program to remove a player who has not yet been convicted of a crime. Either Missouri officials know more about the incident than the rest of us, or they are assuming no resolution will be met in time for Washington to play this season. I applaud them for their quick decision, and for not revoking his scholarship. With the other legal problems facing members of the Tiger football program, this incident cannot linger on to further tarnish Coach Gary Pinkel's outstanding reputation or serve as a distraction for the team.
Missouri opens their season Saturday at 11:30 against the Fighting Illini in St Louis. Sophomore Kendial Lawrence and Junior De'Vion Moore will pick up the slack at tailback.
at 9:03 AM

How will this affect Derrick Washington's chances of going pro?