Gays Seek to get on "Kiss Cam" 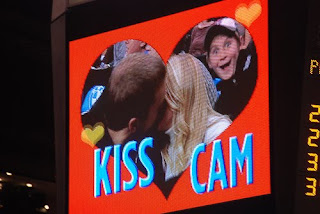 Baseball can be a slow, boring game. Ok, what am I saying "can be," the games are too long, lack non-stop action found in other sports, and even this guy can be a star player (yes that is a baseball player, not a pie-eating competition champion). Naturally, stadiums have gotten clever at adding events to keep fans interested: prize give-aways, various races and most notably, the kiss-cam. You know you start rooting hard when you see Grandpa and Grandma start making out in front of thousands of people.

Gay activists in St. Louis want in on the fun too, and are now asking Busch Stadium to put them on the kiss cam. Thats right, Ozzie Guillen and his team aren't making the sport gay enough already by kissing at the end of games. To protest, over 200 members from the gay community will be attending a Cardinals game this saturday to try and be heard.

My first thought on this issue was "gay people go to baseball games?!" Next time you are out at a ball park, take a look around the crowd. There aren't exactly a bunch of guys that look like this group are there? You are more likely to see these guys or, if we are lucky, her. The gayest thing a baseball game is when "YMCA" comes on the loudspeakers; where are all these oppressed gays in the stands?

On the issue at hand, I'm all for gays having equal rights, but lets be real. Not everyone shares my viewpoint, especially baseball fans. I'm talking loud, angry, and incredibly drunk baseball fans. Showing guy-on-guy action on the jumbotron is going to lead to some fights and unpleasant situations which could be avoided. Then again, maybe some girl-on-girl action could boost attendance. We know the Royals could certainly benefit from selling some more tickets...
at 3:44 PM