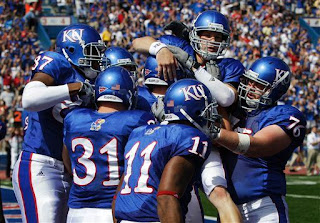 After suffering one of the worst and most embarrassing defeats in school history, almost everyone had written off the season for KU football. The team, losing some of the most prolific players in the program's history, was deemed finished and many fans started calling for head coach Turner Gill's head. Many fans simply hoped KU could at least score a touchdown and keep it relatively close against a ranked Georgia Tech team who was fresh off a huge win over its own FCS opponent in week one.
KU was able to answer its critics and save its season, upsetting heavily favored Georgia Tech 28-25. The KU offense, now led by freshman quarterback Jordan Webb and freshman running back James Sims, moved the ball early and often and almost made the offensive debacle in week one a distant memory. KU's defense gave up yards on the ground, but was able to eliminate the Yellowjacket's passing attack and come up with several key stops on fourth down to help KU seal the upset.
The upset was exactly what first-year coach Turner Gill needed to gain back the faith of the Jayhawk fans and players. After an embarrassing loss, it was important for KU to at least be competitive against Georgia Tech, but the upset gives KU momentum and a fresh start to its season.
While the win is huge for the program, it is baffling how KU could look so terrible in week one and so much better in week two. It is possible KU had been overlooking North Dakota State with Georgia Tech on the horizon, however just one score against the FCS Bison would have provided a victory. One thing is for sure, KU has now become one of the most unpredictable teams in the country, and all predictions for the 2010 season are now meaningless. At the very least, KU football gave its fans a reason to believe again.
at 5:12 PM