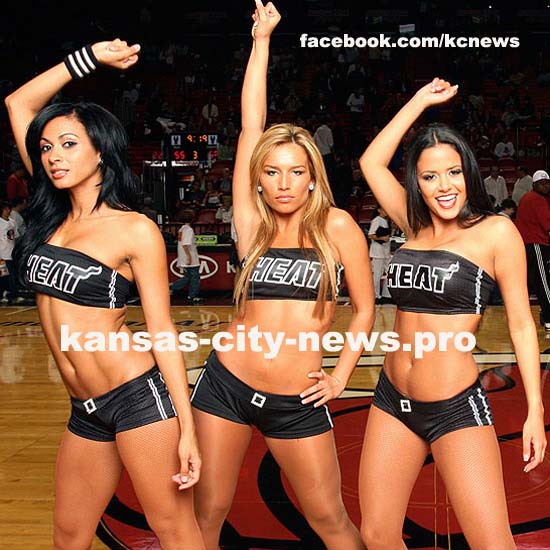 NBA basketball hits Kansas City next Friday October 8th at The Sprint Center when The Miami Heat take on The Oklahoma City Thunder.  Yes, that's right, I said The Oklahoma City Thunder - appearantly they have an NBA team.  Anyway, this will be a very big night at The Power and Light District in downtown KC and if you're coming in from out of town you'd better reserve your hotel rooms now.

The most exciting thing for most at this event will be watching the Miami Heat "SuperFriends" LeBron James, Dwayne Wade, and Chris Bosh mop up the court with the poor Oklahoma High School team or whoever they are.  I'm pretty sure that this game will be over by the first period.   The story behind The Miami Heat is that they came into the 2010 NBA season with 45 million dollars in their salary cap pocket ready to spend money on big players.  With this giant wad of cash they were able to keep star player Dwayne Wade and the add LeBron James and Chris Bosh.  LeBron James made a mockery of the Cleveland Cavaliers when he televised his decision to go to Miami, turning the decision into a media frenzy.  LeBron signed for a mere $110 Million and Wade and Bosh both signed for a measly $107 Million. - Kansas City News

I have to think of the New York Yankees when I think of the Miami Heat as they have both pretty much bought their way to the top.  The NBA, like the MLB is already pretty one sided as far as the teams go, but hopefully it won't get as bad as the MLB.  Coming from a city like Kansas City it's difficult to watch our poor Royals struggle because our owners would rather build a shiny fancy new stadium that is pretty much like a giant BAR now than to spend money on actual players - or at least keep around the good ones.  Just think, in 1985 when the Royals won the World Series the highest paid player on the team only made $1 Million per year (George Brett) and winning series pitcher Bret Saberhagen only made around $800,000.  Times, they are a changing'. - Kansas City News

Tickets for the Miami Heat game at the Sprint Center in Kansas City are on sale at Ticketmaster, and if you want some really incredible tickets, visit the cranky guy at the Sports Memorabilia Store at Oak Park Mall - he's probably got a couple floor seats for around $750 a pair.  After the game The Power and Light District is featuring live music from local Kansas City favorite dance band "The KC All Stars" at 10pm.
at 7:30 AM