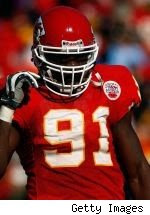 Forget about the potent rushing attack from Jamal Charles, big play ability from Dexter McCluster or the occasional decent play from Matt Cassel. Tamba Hali is the most important piece to the forming Kansas City Chief playoff picture. The former first round pick is entering his fifth season, and after steady production in his first four years, the OLB/DE hybrid is ready to break out and become a star. He will need to, as a pass rush will be sorely needed for the Chiefs if they want to seriously contend for the AFC West title and make a run at the postseason.

Having a game-changing pass rusher is important for any team, and it can be the difference between a team going 7-9 and watching the postseason from home or making it into the NFL playoffs. Growing up in a Packer household, I remember watching Reggie White terrorize defenses during Green Bay’s Superbowl runs in 1996 and 1997. In the title game alone, White sacked Patriots QB Drew Bledsoe three times and was in the backfield all game, ultimately swaying the game. If Hali can step up in big moments and take down the quarterback – as he did against the 49ers on Sunday with three sacks and countless hurries – the Chiefs may be able to sway some big games in their favor.

Hali’s value isn’t only just bringing down the opposing QB for a loss. His presence helps the entire defense, most notably the secondary. With young cornerbacks and rookie safeties, it will be important for the Chiefs to not allow opposing QBs and WRs all day to operate. With a pass rush, playmakers like Brandon Flowers and Eric Berry can make big plays in the secondary and not get burnt on deep routes. The Chiefs are extremely young on defense, and Hali’s presence can help mask that youth and avoid putting young players in difficult situations.

Tamba Hali will likely never be as dominant as Reggie White, or even as feared as today's star pass rushers like Mario Williams.His presence is important for a young Chief defense that keeps improving every week., and his ability to pressure the QB could help the Chiefs win some more games. If Hali can build on what he has done already this season and continue to be a force, the Chiefs could find themselves playing in January.