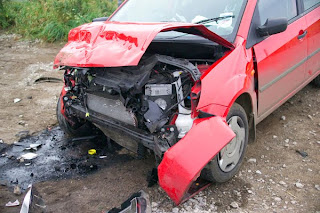 Traffic Deaths Reach a 60 Year Low
The National Highway Traffic Safety Administration released data regarding Traffic Fatalities for 2009. Their findings showed the lowest number of fatalities ever recorded. The telling statistic is 1.13 traffic deaths per 100 million vehicle miles traveled. The drop has been attributed to several factors. Most notably, new, safer vehicles. Every year vehicles are equipped with better technology to increase survivability of automobile accidents. Rollover technology and improved braking systems lead the way. Seat belt use is also up, and drunk driving down, though drinking still plays a role in over 30% of fatal accidents. One "expert" also cited less distracted driving as a potential factor, although it seems to me about half the people on the road are on the phone at any given time.
Locally, Missouri and Kansas generally followed the same trend. 2008 was the lowest year on record for traffic deaths in Kansas and they only had 2 more (386) in 2009. Missouri's fatal crashes were the lowest in 60 years. Missouri can probably thank a huge improvement in their road quality. A perennial laughing stock - in the last several years, quality roads has been a priority in the Show Me State. The economy can also not be ruled out as a factor. People are taking less vacations - shorter distances from home than in the past. Less nights out for the family (more folks staying at home and not driving) also would play a role.
Lets hope this trend continues. Vehicles on the road will get even safer as older models are traded in for newer ones. Awareness of distracted driving is increasing, and seat belt use is becoming commonplace. Stiffer penalties for drinking and driving could help reduce the number of drinking related crashes.
at 8:33 AM

This is great, but can you get my girlfriend to stop wrecking my cars?