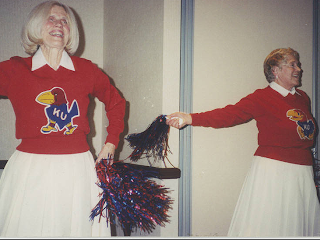 Area colleges officially started basketball season last night and KU put on their annual Dog and Pony show know as "Late Night in the Phog" (it should be called "acting stupid in that dump that looks like a warehouse"). This is good news for Kansas fans who can stoke the fires of inflated sense of "Self" again. With the football team looking a little bit like a Division II powerhouse, thoughts can now turn to a little round ball. Kansas has won 6 straight Big 12 regular season championships, and there is no reason to think otherwise until another team steps up to knock them off. The Jayhawks are not, however, the favorite this year. That title belongs to Coach Frank Martin and his Kansas State Wildcats.

In Manhattan, the Wildcats also held their first public scrimmage and team introduction on Friday night. But they did more than just practice as Athletic Director John Currie also announced plans for a $20 million state of the art basketball training facility. This is good news for the Wildcats, as they were the only institution in the Big 12 that had not at least begun a basketball training facility. This should help with their future recruiting efforts. The Wildcats are looking to improve on their run last season into the Elite Eight.
Down I-70 in Columbia, the Tigers started out in a low key fashion with only a simple afternoon practice. They will not show the team to the public until the annual Black and Gold Scrimmage on October 28th. Head Coach Mike Anderson likes the low key approach and takes a workman like attitude to coaching. Of course, the fact that media that covers Mizzou are all in College Station for the Football game probably has something to do with the delay. Coach Anderson finally has a true big man in Ricardo Ratliffe (Big 12 coaches voted him preseason newcomer of the year), Mizzou has good reason to be optimistic about the upcoming season.
at 7:15 AM