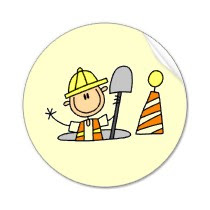 You think you had a bad day at the office yesterday? Twenty-seven year old construction worker Daniel Collins most likely had a worse day. Mr. Collins was working on a project relining sewer pipe (talk about a shitty job - ehh) in Raymore, MO when his security harness broke and he fell in the sewer system and was swept into a two-foot diameter pipe with rushing raw sewage. Workers followed the sewer line to locate Mr Collins nearly a mile from where he entered the sewer. He was in raw sewage for nearly two hours before being pulled out by a rescue worker around 10AM Tuesday. He is currently being treated for hypothermia and likely ingested some of the, uhhh, waste water. He is being treated with antibiotics for fairly obvious reasons.
Searchers heard the mans cries while canvassing an area around Crrekmoor Golf Course. The firefighter that rescued Collins described the scene as "really nasty" - when he popped the manhole cover the methane gas was so strong it "kind of stings you a little bit". Nevertheless, he went down twelve feet into the chamber where Collins came to rest and plucked him out of there. Rescue workers got the man out of his soiled clothes and put blankets on him until a medical helicopter arrived.
Mr Collins, who is from the Lake of the Ozarks, works for Rosetta Construction Company out of Springfield, MO. The United States Occupational Health and Safety Administration is already on the scene looking for causes in the accident.
at 9:21 AM

That sounds like just about the most awful thing ever!