Donald Trump for President in 2012? 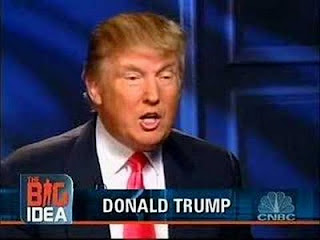 Recently Donald Trump has been very outspoken about his frustrations with the American foreign policy and economic turmoil.  He makes several valid points and speaks clearly and directly to the issues that are plaguing our country.  It's actually very refreshing to hear someone speak who has no affiliation with any political party.  Would it make sense to hand the country over to a self made billionaire and let him run the country like a business?  If Donald Trump could be as successful at running America as he is at running his massive business empire, this Kansas City news editor says let's give it a try.

A recent secret poll was taken in New Hampshire to determine the public opinion of a possibility of Trump for President in 2012 - and the results were overwhelmingly positive.  So far, Donald has come right out with his political ideas:

One of Trump's concerns is that our leaders are spineless "friendly" types that are sent to negotiate with foreign leaders.  In contrast, the foreign leaders are straight shooters, incredibly sharp and aggressive businessmen who have actually admitted that they "can't believe what they are getting away with" in regards to taking advantage of America.  Trump sites China as our biggest current enemy, claiming that Americans such as himself cannot build a business in China while America lets everyone and anyone buy pieces of America.  Trump allures to the fact that there are a small group of people (perhaps he is alluding to the fabled small circle of people who actually run America) that he believes could "go to bat" for America in business situations and come out with positive results.  In so many words Trump states that the guys that he would send in to negotiate foreign policy wouldn't exactly be the "please everyone" friendly type.  The guys that Trump would send in would be hard hitting ball busters that would get the deal done.  Trump goes on to state that our leaders are soft and weak.

Cleaning Up The Other Guy's Mess

Trump tells a story about personal acquaintances that "own, not run, but OWN" Kuwait.  He states that while America was in Iraq fighting a war to get oil wells back for Kuwait, the leaders of Kuwait were nestled safely in their lavish condos in London (Trump noted that their "condos" were more like entire buildings in London).  When America won the oil wells back, the sheik leaders returned to Kuwait and resumed control of their billion dollar oil wells.  Trump noted that after all that America did for Kuwait, they weren't awarded a single dime, and the Kuwait leaders actually raised the price of oil and remain infinitely wealthy.  Back in America, we have unemployment and former bank vice presidents working at Wendy's and the pavement of the road leading to one of America's most important cities (Manhattan) is crumbling away.  It is obvious that Trump would like to see America fix it's own problems for a while rather than spending billions of dollars cleaning up the other guy's mess.

The Strength of the Village

Special interest groups are buying public policy.  Even when favorable policies are put in place, the special interest groups come right behind them a few months later and manipulate the rules through clever loopholes in the system.  The end result, we are losing the middle class.  One hope that emerges is the recent rise in social networking such as independent websites and blog sites.  Social networks are important because they ensure a certain amount of honesty.  Through these networks everyone's voice can be heard, and American communities can make up their own minds on what the real issues are.  Without the influence of crooked special interest media, the country could literally fix itself eventually.  For example, through the social network, some people have actually created their own jobs.  What do you think we're doing with this blog site :)

Two Heads are Better Than One - Not Necessarily...

Trump also brought up the point that our country is divided into two parts, Republican and Democrat.  Why?  "If I had a company and I wanted to appoint a leader, I sure as hell wouldn't appoint two guys who had totally different views and spent more energy fighting each other than solving the big picture.  The idea of having two parties who spend more time and money battling each other INTERNALLY in America than actually solving our problems as a team is insane".  This is true - I always thought that the saying went "divided we fall".  So......what are we doing then?  Republican, Democrat, Animal, Plant, Mineral - how about we ALL just focus on the same goals.

Lastly let's consider that Donald Trump could just say screw America, buy himself an island in the tropics, retire, and never surface again.  But instead, he's taking some initiative and showing pride and concern for his failing country.  And maybe, just maybe, he intends to do something about it.  No matter what you think about Donald Trump for President you have to respect that.
at 8:06 AM

You should know that the US forces participated in the liberation of Kuwait in 1991 along with other armies from the gulf, Egypt, Syria, UK, France, and many others. Secondly, speaking about "sheiks" or the leaders Mr. Trump had mentioned, you should know the fact that many of them were victims of this war, some of them died, captivated, and tortured. Moreover, Kuwait still memorizes the sacrifices of the US soldiers who lost their lives in the war. The Kuwaiti embassy in Washington is helping the families of those soldiers and appreciate their role.
It is not fair to depict Kuwait as a mere oil producer. Actually, Kuwait spends more than 1.5% of its GDP in foreign aids for more than 100 countries. And since he mentioned "awards", Kuwait now is one of the major allies of the US and NATO. Kuwait is the biggest logistic base of the US troops. Of course, these are just few facts that Mr Trump's needs to know about Kuwait.

Here is a view of Trump in Scotland (where his mother came from). He is trying to build a golf course/luxury housing development in a coastal area and is trying to evict local residents - but now is angry to find a windfarm offshore will spoil the view:
http://www.trippinguptrump.com/