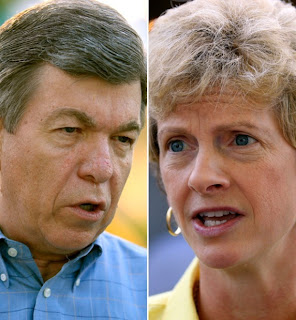 Missouri Senate Race Heats Up
With less than a month before Missourians go to the polls to elect a Senator to take the place of the retiring (it's about time) Christopher Bond, the mudslinging and political ads are as expected this time of year. This year's race is between two political veterans from well connected Missouri Political Families. Robin Carnahan, Democrat, is the current Missouri Secretary of State, and daughter of former Governor, the late Mel Carnahan. Her Brother is a US Congressman from St Louis. Roy Blunt has been involved in Missouri politics since 1972, and has been a Congressman since 1997. Blunt's son, Matt Blunt is the former Governor of Missouri. His other two children are lobbyists. Both candidates have solid name recognition with voters.
Recently Blunt has managed a clear lead in the polls, capitalizing on President Obama's huge unpopularity in the state. Even the NY Times says so. Recent ads from Blunt show Obama saying in a speech that "I need another vote", and "It would have already been done of I had Robin up there". With Obama job approval ratings at well below 50% in Missouri, especially on Health Care, these ads have been effective. Blunt has also attacked Carnahan on the $107 million grant that Carnahan's brother's company received from federal stimulus money. Inferring that Political influence was used to steer the money his direction.
Carnahan's camp counters that Blunt is nothing more than a Washington insider who also has used influence to benefit family members. Blunt's wife and two of his children are lobbyists. Of course the real problem lies with the voting public. Let's be honest, neither candidate really is worth voting for, both are too politically connected to serve the people well. If voters would really pay attention and stop just pulling a lever that has a name they recognize, we would all benefit.
at 9:30 AM