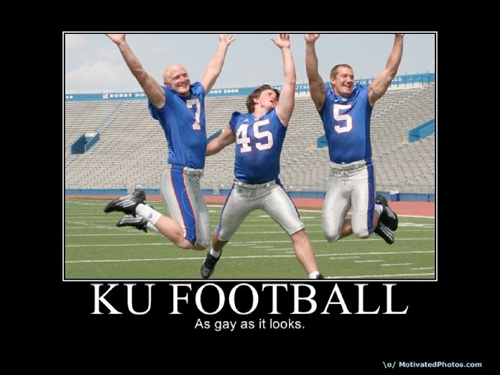 Today, Nebraska bested Mizzou by a score of 31-17.  It appears that Mizzou didn't show up on either defense or offense in this game.

The good news is, is this is COLLEGE football - who the hell cares?  It's like watching a band rehearse, these are not professionals and you must really have a LOT of spare time on your hands if you actually have time to pay attention to college sports in general - especially college basketball, now there's where you find the REAL geeks.  Thank GOD they don't make much of a big deal out of college baseball or we'd have a whole new gathering of college sports dorks.

College football is completely unorganized and it is based on some made-up ratings system that no one actually even understands - or really cares about anyway.  There is no playoffs, there is no sense of closure like the Superbowl, the players are nameless, faceless joe's who are subbed in and out thoughout the game without notice.  I understand that it's cool to watch some of the college players who are surely going to the pros so you can say to your other college sports-watching dork buddies "I remember watching him play at Gonzaga" - or one of those retarded college team names.  Please get off of my TV screen so I can watch the professional highlights.

I definitely wanted Mizzou to win today but look at the bright side:

The stupid Cornholers of Nebraska are ALL THEY HAVE in that redneck town - they don't have a pro team (because no one would want to play there or live there, it would be like trying to get Lebron James to stay in frickin' Cleveland - HA!).  Nebraska has to cling on to the only piteous thing that they have and that is their cornhole COLLEGE football team - and that's pathetic enough for me.  Enjoy your win today Nebraska, then go back to living in the middle of nowhere with bunch of ugly metal factory buildings, miles of corn and several hundred 24 hour smut porn shops along the highway for the truckers - not to mention Nebraska women are all 6'3", 200 pound volleyball / basketball playing sweaty-cooch amazon girls.

As for Kansas City, we get to watch a REAL pro team play tomorrow.
at 7:34 PM

Poor Mizzou, they are just looking terrible. I wish today's game would have been a better match. KU tried to give the game away to them, but MU couldn't take advantage of the gift of 20+ turnovers. I'm afraid Mizzou is starting to resemble the Chiefs in that they looked decent during the regular season, but really are not equipped for the playoffs or in MU's case, the bracket.

What the fuck is a "bracket"? - you are a fucking dork - college sports are for geeks.

I know that most of you are STEALING our photo off of this site, so at least hit the Google + button on the page while you're here. Thanks!