Nunley Likely to Aviod Executioner until 2011 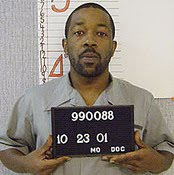 Roderick Nunley's execution has been put off until probably 2011, at least. Missouri Attorney General Chris Koster was pushing up until the last minute for a way to proceed with the execution. Koster was attempting to get the Missouri Supreme Court to clarify their ruling denying an earlier stay request. That denial was at issue when a Federal Judge issued a stay on Monday. That Judge's decision required clarification from Missouri as to why they have denied new sentencing of Nunley by a Jury. Of course, Jury sentencing probably won't turn out any differently, but this does prolong Nunley's worthless life. The Missouri Supreme Court will revisit the case and has scheduled hearings and oral arguments into January of 2011.

Nunley and accomplice Michael Taylor, brutally raped and murdered 15 year old Ann Harrison in 1989. They both sit on Missouri's Death Row and have now for longer than their victim was even alive.

These cases are a prime example of why many oppose the death penalty. It takes many, many years to impose the Sentence, and untold millions of dollars spent on court time, lawyers for the state, etc. Though the thought of housing and feeding these animals for their lifetime is not very appetizing, it costs more to actually execute them. There certainly is no easy answer. Some might say "Just Do It" - and I understand that, but no doubt there have been innocent people put to death, and I would want every doubt erased if it was me or someone I loved in this situation. On the other hand, if it were my child that was murdered, I would probably want to kill the perpetrator myself.
at 10:46 AM