The Sunflower Showdown is This Thursday in Lawrence 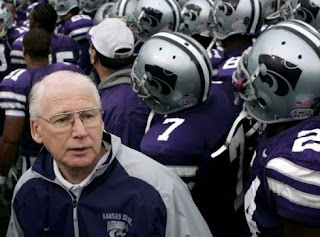 For the one hundredth year in a row, the University of Kansas Jayhawks will play the Kansas State University Wildcats in football this Thursday night in Lawrence. The Jayhawks got an extra week of practice after a bye giving them more time to work on game plan, or go into a severe depression after getting run out of Waco, TX last Saturday by the Baylor Bears. The Jayhawks are 2-3 overall, and 0-1 in the Big 12. The Wildcats come into this one licking wounds of their own having been abused at home by the Nebraska Cornhuskers. As bad as Kansas has looked this season, you can always throw out the record books when it comes to the "Sunflower Showdown" (God, what a stupid name). I would even say they have a chance.

The all time series record between these two fine institutions is 65 for KU, 37 for K-State, and 5 ties. More recently the series has been pretty even having split the last eight meetings, but KU has won the last three meetings in Lawrence. Kansas State has turned in the better body of work thus far this season, but has not ventured past the friendly confines of Bill Snyder Family Stadium, this will be the first road test of the year for the Wildcats. Vegas has the Cats favored by 2.5 points. I'd lay the points in this one, Kansas State wins by a touchdown.

The game will be widely televised on Fox Sports Net regional carriers at 6:30PM Thursday Night, although I can't imagine it will have a large audience outside the State of Kansas.