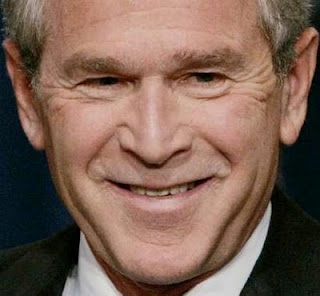 "You know, I've written this book and it's going to come as quite a shock to some Americans who didn't think I could read, much less write..."  Bush has several comedic quips about his upcoming book where he goes in depth about his Presidency, Iraq, and the economy.

Bush claims to be finished with politics and sits comfortably in his office in Dallas, Texas, overlooking the Dallas skyline.  I wonder if the government will put limitations on what Bush can publish in his book, are there men hiding out in the bushes outside his office with walkie talkies?  It would be so refreshing to hear the real truth behind the US Government - all we get is the filtered out fodder that makes it impossible to make clear decisions pertaining to US politics.  It is true that most people in the US blame everything that is wrong with our country on Bush, but I assure you that is not the case.  For instance, Bush claims that he actually wanted to let all of the bail out companies fail, but he feared a depression.  When polled, 71% of Americans blame Bush for all of America's problems.  This is a perfect example of an ignorant public, not because Americans are not intelligent as a whole, it's just that they don't have (and never will) all of the information to make sound decisions.  Our government is so secretive and scandalous that the truth would probably cause most citizens to run to Canada.

It will be interesting to see if Bush's new book will shed any REAL light on the political scenario, but I'm guessing that the "men in black" hiding in Bush's bushes (nice!) will see to it that America stays in the dark about what actually goes on in Washington.
at 3:29 PM