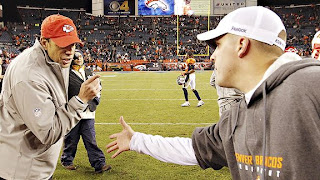 There was no drama during the game, at least not after the Broncos first drive. It was clear after the Broncos scored the first of many touchdowns, that it was going to be a long day in Denver. The Broncos went on to a 35-0 first half lead and a final score of 49-29. There really isn't much to be said about the game itself other than what is painfully obvious. The Chiefs defense was beaten badly by the Broncos offense, and the Chiefs offense wasn't going to do anything to keep up. There was certainly enough blame to go around.

Now to say the Chiefs are done for the year, that is just stupid. This team is still tied for first place in a weak division thanks to their 3-0 start, and there is still time get the ship righted. Injuries in our secondary have been costly, and Dexter McCluster certainly can have a positive effect on our offense when he (hopefully) returns next Sunday. A very winnable game is upcoming at HOME against the mediocre Cardinals and home games against Denver and Oakland still remain on the schedule.

All the drama in this game came at the traditional post game coach greet at midfield. Todd Haley refused to shake Josh McDaniels' hand as referenced in the above picture. Instead he was given a finger and a stern message of some sort that at least up to now remains unknown. The speculation is that Haley took exception to the fact that all of Denver's starters were playing until the end of this game, in contrast to last year when the Chiefs throttled the Broncos in Denver, Haley called off the dogs - including sitting down Jamal Charles who had a shot at the single game rushing record. I personally have no problem with a team "running up the score" - if you don't like getting your ass kicked, then play better. But, whatever the reason, I like the fire that Todd Haley has - it will certainly add a little more spark to the rivalry. I don't like that little prick McDaniels either - Fuck him.
at 11:48 AM