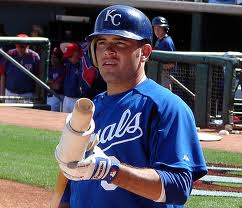 The Kansas City Royals have traded away the longest tenured and probably most recognizable face (if there are any anymore) on the team. On Wednesday David Dejesus was trade to the Oakland Athletics for two pitchers - Right Hander Vin Mazzaro and Lefty Justin Marks. DeJesus played for the Royals for 10 seasons with a Batting Average of .289 and 61 Homers. He had a nice career with the Royals and I am sad to see him go. Oakland was a .500 ball club last year, so maybe he can help them. Maybe even get into the playoffs, something he obviously was never going to do here.

This is such a problem with baseball now and has been for a long time. No player stays with one team for his entire career anymore, it's such a shame. I grew up in the Royals heyday and it was great to go to the park and see all the players that you knew from year to year. It's too bad that today's kids don't get that. Well, anyway, let's see what we got for DeJesus.

Vin Mazzaro is a 24 year old Right Hander originally from New Jersey. He joined Oakland's farm system in 2006 and had a great year at Double A Midland, TX in 2008 winning several honors including mlb.com's Double A starting Pitcher of the Year. His Major League Debut was in June of 2009 and his career record is 10-17 with a 4.72 ERA.

Justin Marks is a young Lefty drafted by the A's in the Third round of the 2009 Amateur draft. He pitched Collegiately at Louisville and was named the Big East pitcher of the year for 2009. Marks spent last season in Class A ball with mixed results. Like most baseball trades, it will be a while before the success or failure of the deal can be measured.

The Royals also released pitcher Brian Bannister on Wednesday.
at 9:25 AM

Sorry to see you go Dave! We had fun in right field last year. Come join us in the Party Deck at the K when you retire.