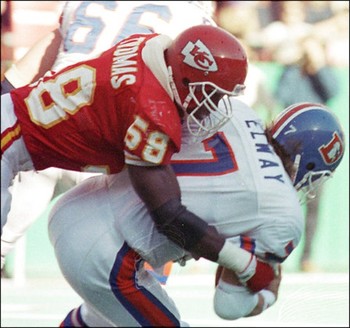 
The Chiefs go into Denver today after a bitter loss to the extremely weak Oakland Raiders, who lucked out with a last minute miraculous pass to some receiver that no one has ever heard of, leading to a field goal by fat-legged Janikowski.  Flowers should have intercepted - or at least KNOCKED THE BALL DOWN since he got to that pass first (still pissed about that game, can you tell?).  But alas, looking forward, the Chiefs MUST win today against the ever so poop-stained Denver Broncos, or I will revert to my cynical Chiefs game viewing style that has protected me from stress for so many years.

The Broncos are the equivalent of a mediocre high school team this year, and the Chiefs should tromp these guys by at least 20 points.  Flowers better catch every ball that touches his hands, and Jamaal Charles better run like it's his job, er....wait, it IS his job, yeah, yeah.  I don't like being teased, and with the Chiefs 4-0 start I actually started watching the Chiefs games without being jaded to protect myself from getting upset, which was easy to do for the last few seasons when they were playing for good draft picking order, basically. I would honestly rather have a terrible record and be able to relax and laugh at the Chiefs than to be teased into paying attention to the games, sitting on the edge of my seat on every 3rd down, and then ultimately giving myself yet another ulcer.  All that said, the Chiefs better fucking win today son, and win big, so that I may drinketh beer early and often and not have to look at the TV screen on every play.

At this time, the Chiefs are a mere 1 point favorite, which shows the stat masters in Vegas don't have much faith in us right now, especially on the road.  Denver has a mish-mash of running backs who pretty much don't do anything (believe me, I've had all of them on my fantasy team at one point or another this season and have subsequently dumped them all).  The Denver Broncos quarterbacks are suspect in that Kyle Orton has the same problem as our beloved Matt Cassel possesses in that he can only see about 20 yards downfield at the max.  If they sneak in Tim Tebow at any point, Tamba Hali needs to step on his head and say "welcome to the NFL cracker!".  The Chiefs secondary will have their hands full with Brandon Lloyd, and to combat this wily wide out, the Chiefs have to get some serious pressure on Kyle Orton or they will have some problems.  Lloyd has been on FIRE this season.

Well, off I go to a house party / tailgate full of SERIOUS Chiefs fans, so hopefully this one goes well and we will drink and be merry :)


Here's some dorky stats about the Chiefs / Broncos History...