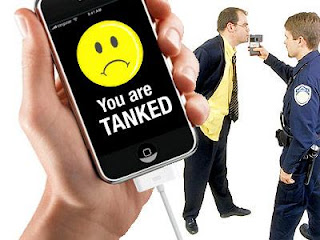 Well, the weekend is here again and it's time for our weekly Kansas City DUI checkpoint update.  Remember that it now does absolutely no good to refuse to take the breathalyzer or field sobriety test as police now have the authority from the Supreme Court to physically take a blood sample from you at the scene if you're suspected of driving under the influence.  The best option if you've been drinking is to muster up as much sobriety as you can, be honest with the police - "yes sir I've had a couple drinks tonight but quit drinking over and hour ago so that I would be safe to drive" - do NOT lie to them and tell them that you haven't been drinking.  I don't know if you've ever been around someone who is drinking, or has been drinking that day - if you have not had anything to drink (like police officers) then you can smell alcohol on their breath a MILE away.  Once you roll down your window the officer can smell alcohol even if you've only had ONE drink.  Do not lie as that angers them, just tell them that you are good to drive and that you are going STRAIGHT home and they will let you go 9 times out of 10.  At DUI checkpoints the police are really only looking for those people who are CLEARLY intoxicated.  Just be straight with them and look them in the eye, you will be fine.

DUI checkpoints in KC tonight will be in the usual places:

Anywhere along Ward Parkway - especially if you're headed south from the plaza.  Most often they set up a checkpoint at either 77th and Ward Parkway or at some point near the plaza.

Avoid Southwest Trafficway all together.  Typically they will set a checkpoint up near the Sunfresh or near the Broadway intersection.

Another road to avoid is Wornall Road - they usually set up checkpoints at 77th and Wornall in the Waldo area every weekend.  If you're partying at the Brooksider or at The Well your best bet is to grab Main Street or Oak and crawl your way North or South whichever way you are headed.  I've also seen them set up checkpoints at 93rd and Wornall just as you round the turn headed towards the 95th Street intersection.  It's a blind curve and it was just made for DUI Checkpoints.  My old friend Johnny Cartsonis wrecked my friends IROC Z on that very curve and took out a tree - he walked away from the wreck but alas the IROC did not.
at 7:15 PM