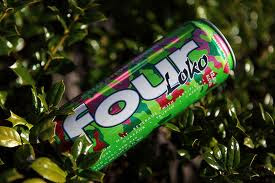 The FDA is expected to rule that caffeine is an "unsafe additive" in alcoholic drinks - that ruling could come later this week. It would effectively ban drinks like Four Loko - a drink that is fruit flavored, packed with caffeine, and 12% alcohol. It's known as "Black out in a can". The high levels of caffeine in the drinks can make the consumer less aware of how drunk they are. Four states have already banned caffeinated alcoholic beverages (Oklahoma, Michigan, Washington, and Utah). The action comes after several college students in Washington had been hospitalized after drinking the products.

This all sounds kind of reactionary to me. So a few idiot college students damn near killed themselves getting boozed up at a house party, big deal - been going on for decades. I still have to hear my friends ridicule me with the phrase "I loooovvvee Tequila" as they reminisce about me crawling from my bedroom to the bathroom to puke my guts our every 30 minutes. Ahh, those college days - makes me kind of misty thinking about it.

Anyway, I guess my point is that it's not going to accomplish anything to ban these products, much like the banning of anything else. So everybody raise your glass of vodka and Red Bull for a toast. Kids these days, what a bunch of pussies!
at 7:38 PM