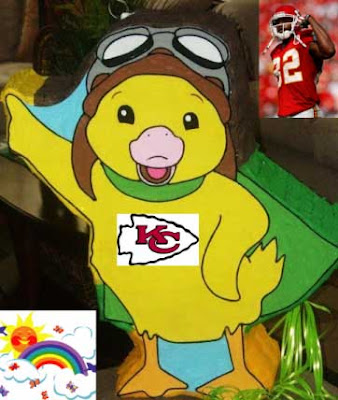 Somebody call me a peach terapist! I will never forgive my cousin-in-law for ruining how I hear what people say when they say Dwayne Bowe of the Kansas City Chief's name. Each time I hear it now all I hear is a 4 year old kid with a speech problem trying to say "the rainbow" and out comes Dwayne Bowe. However, with a 3 TD performance in Sunday's game against Seattle which catapulted him to #1 in the Chief's single season record for number of TD's, all of that went away. Now I just picture the little duck from Wonder Pets sitting next to me saying there is an animal in "twuble" somewhere...and "da wainbow jus scode a touchdowan" and I am totally cool with it.

Dwayne Bowe has matured quickly under the guidance of Todd Haley and apparently all of his new found maturity was sucked directly away from me as is apparent from reading this article.

As a life-long LSU fan, I have been pulling for the rainbow...dangit!...I mean Dwayne Bowe since he came to Kansas City. It is great to see him having such success.

Some bloggers will white anything for a laugh...but sewiouswy...congwaduwations to da wayne Bowe that shines over KC!