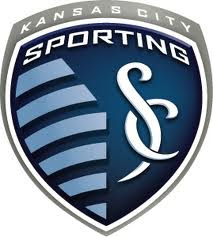 The team formerly known as the Kansas City Wizards announced Wednesday afternoon that their name going forward would be Sporting Kansas City. The team is trying to reinvent itself with their new stadium opening next summer. Their new logo was also unveiled, and hopefully all this newness will translate into better soccer played on the field. The Wizards were disappointing last season, finishing out of the playoffs in a league where half of the teams go to the postseason.

The new name is a nod to the way European and South American clubs name their teams. Around the world, professional sports teams are known as Sporting Clubs and might have teams competing in several different sports.

Originally Kansas City's Soccer team was known as the Wiz - perhaps the worst EVER name for a sports team. They changed to the Wizards a season later - not much better. They definitely needed a new name and the timing is perfect with a real soccer stadium opening up. I think they went the wrong direction with the new name, however - a mistake many MLS teams have already made. Using Football Club (FC) or Real in the name alienates many Americans who are not used to sports teams being named in this way. In a time that is very important to growing soccer in the US, I think more traditional American name would serve better. Then again maybe no one cares about soccer anyway and never will. Maybe it will grow on me.
at 9:17 AM