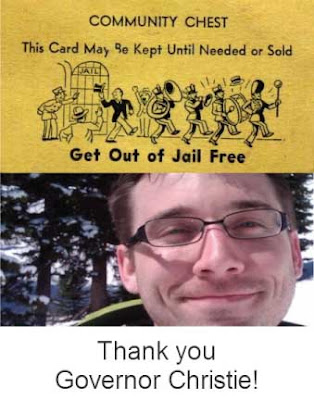 For those of us who believe in the 2nd Amendment and victim's rights to own, possess, and carry firearms, it is a relief to know that justice has finally been done. Earlier this week Brian Aitken, the New Jersey man convicted of a bogus felony gun charge and sentenced to 7 years in prison earlier this year, had his sentence overturned by Governor Chris Christie of New Jersey after serving only 4 months.

Aitken was in the process of moving from Colorado to New Jersey. He knew he needed to move his firearms, and also knew that New Jersey was what I like to call an uneducated, left-wing liberal state that places fear of gun ownership and fear of the 2nd Amendment higher than victim’s rights to protect themselves. He called New Jersey to ask how to properly store and transport his firearms from his then home state to his new home state, New Jersey, and followed the instructions to the letter.

In a moment of sadness, he said under his breath to a relative that life isn’t worth living, and then he proceeded to move. That relative alerted authorities in New Jersey, they picked him up when he got to his new place, found the properly stored hand guns unloaded with trigger locks and ammunition separated from the firearm, and then proceeded to arrest him…after he had done exactly what they told him to do as it related to transporting his firearms.

Nothing about his conviction made sense. He did everything right. He refused to take a plea bargain. He knew the jury would side with him and there was little doubt he would be convicted…after all he had done everything right…right?

New evidence shows that Brian Aitken’s conviction was nothing more than a witch hunt by an activist judge who wanted to make an example of a gun owner and ruin his life. A juror sent an email to Aitken a few days ago explaining to him that the judge kept bullying the jury for the conviction instead of letting the legal process work. Did you catch that? A judge influenced a jury. The judge was pushing them for a conviction when there is a good chance had he left them alone they would have found the defendant not guilty and Brian Aitken would have never had to spend 4 months in jail which according to him "There's not even words for it. It's terrible."

Good news though...that judge will never sit on a bench in New Jersey for the rest of his life as Christie has chosen not to reappoint him (for something unrelated).

I have been a fan of New Jersey Governor Chris Christie since the day he put a teacher in her place at a town hall meeting and will make an incredible president of the United States when he decides to run. If you wonder why education is screwed up in America, watch this exchange between an educator and Governor Christie for one little slice. You will be a fan too...it is simply perfection.