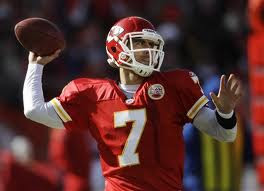 The Chiefs started a little slow on Sunday in St Louis against the Rams. By the end of the first half, however, the Chiefs had stolen momentum and it was apparent they would go on to a victory. The Rams got off to an early 6-0 lead before the Chiefs woke up on offense and scored 14 unanswered for a 14-6 halftime Chiefs lead and never looked back. Ryan Succop (how would you like to grow up with that last name) added added two field goals, including a 53 yarder to put the Chiefs up by 2 TDs in the 4th Quarter. A Rams score added some drama until this Jamaal Charles outstanding 80 yard run set up an insurance 2 yard TD run by Thomas Jones. Incidentally did you see Cassel's AWESOME spike after Jones's TD - Man he was fired up.

Matt Cassel didn't show any ill effects of his recent appendectomy and was very efficient all day (with the exception of the 1INT he threw). He was 15-29 for 184 yards, and I counted 2 terrible drops by receivers, both on third downs. Cassel also had a gutsy 13 yard scramble in the second quarter. Great performance by a gamer 11 days after invasive surgery.

You also can't say enough about Jamaal Charles. He increased his season yards/carry to an incredible 6.4, more than yard/carry more than anyone else in the league. He probably would have reached the endzone on that 80 yard run if not for legs cramps that had bothered him throughout the game.

The Chiefs still hold their destiny in their hands. Wins at home against Tennessee and Oakland ensure a Division title and a playoff game at Arrowhead. Get some Chiefs!
at 10:19 AM